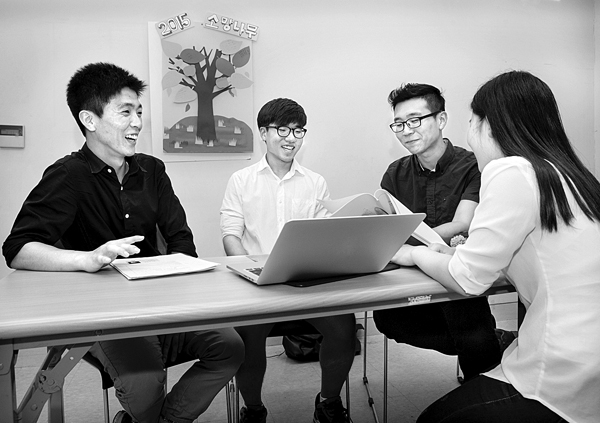 North and South Korean students from Soongsil University hold their last meeting of the semester for the Spring club on June 19. By Park Sang-moon

Midway through last month, a group of 14 students from Soongsil University convened for their final meeting before the summer break.

The purpose of the gathering was for the students to reflect upon the past year as members of what’s been called the Spring club, a unique organization that discusses issues and concepts related to inter-Korean unification - a matter all of them believe must be addressed by their generation.

But perhaps even more noteworthy about the club - its name, Spring, reflects the participants’ hopes for a peaceful and warm reunification - is that its members come from both sides of the demilitarized zone.

Nine students, including its president, Shim Jin-sung, are North Korean and five are from the South.

Shim, 28, came to South Korea five years ago, and until he fled, Chongjin, a city in the northeastern province of North Hamgyong that borders China, was where he called home. Once here, he chose to study political science and diplomacy, feeling passionate about reunification and making a difference.

Until the revamp last year, the club was composed solely of North Korean students. It’s primary goal now, however, is to prepare for unification by facilitating a constant exchange between North and South Korean students, unlike similar clubs at most Korean universities, which have few if any South Korean members at all.

Since then, the group has been actively discussing one another’s cultural differences and working since September to build bridges.

During the club’s recent meeting, its members looked back on their achievements over the past year, namely their various bonding activities, book discussions and volunteer work.

But mostly, the Spring club is a process of mutual understanding between North and South Koreans cultures, which the group members acknowledge have been drifting apart since the separation of the two countries.

“I think that the issue of Korean unification is essential for Korea to advance and become an even better country to live in,” Kim said when asked how unification still matters after more than 60 years of separation. “But most young people show no interest.”

“Since joining the club, I’ve realized many things about North Koreans, and also about myself,” Kim added. “For example, I never doubted that the united Korea’s capital was going to be Seoul. But after asking my North Korean friends about it, most of them said they believed it was going to be Pyongyang. There are so many little details you never really think about before you really dive into the matter.”

What comes after the unification is undoubtedly on all the club members’ minds, and in the year to come, they intend to focus more on finding ways to answer this question.

“We want to go to Germany to study their unification process,” Shim said. “We think that if we can meet Germans who have experienced both times [of separation and unification], we can ask them about what mistakes were made during the unification and avoid them in Korea’s case.”

“Of course, we don’t know when full unification will be achieved, but through our club activities we can actively prepare for it and also contribute to the many processes needed to achieve it,” Shim added as the other club members nodded their heads in agreement.

“We are already experiencing Korean unification through our club,” he said. “Only through the young generation, us students, can we achieve unification someday.”