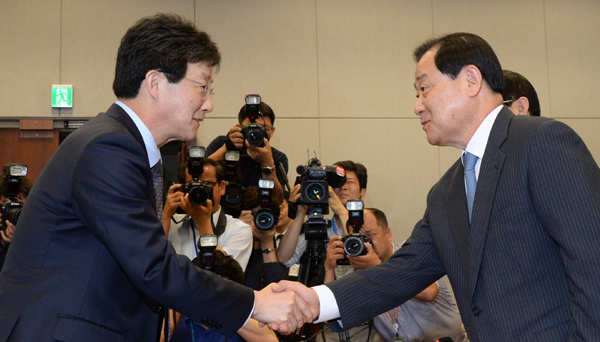 Presidential Chief of Staff Lee Byung-kee defended remarks made by President Park Geun-hye a week ago in which she unleashed a torrent of criticism toward lawmakers, specifically ruling party floor leader Yoo Seong-min, saying that her comments stemmed from a sincere desire to “better the lives of the people.”

On Friday, Lee addressed a meeting by the parliamentary House Steering Committee, which deals with issues regarding the legislature and the Blue House, amid a continuing chill between the presidential office and the ruling Saenuri Party.

Relations have been tense since June 25, when the president demanded Yoo resign to take responsibility for the passage of a revision to the National Assembly Act, which strengthened lawmakers’ authority to demand changes in administrative legislation.

The ruling party chose to support the contentious bill - which Park claimed was “unconstitutional” and later vetoed - in order to secure the passage of another piece of legislation to overhaul the money-losing pension system for civil servants, a key project pushed by the president.

Criticizing the practice of political bargaining, Park rebuked the Saenuri, specifically pressuring Yoo to step down for his “politics of betrayal.”

“I think President Park made her remarks based on a sincere desire to better the lives of the people, and [her belief] that the public’s livelihood should be at the center of politics,” Lee said.

The Friday meeting drew special attention, in particular, however, because Yoo chairs the committee.

Undeterred by Lee’s arguments, lawmakers from the main opposition New Politics Alliance for Democracy also made light of the current standoff between Park and Yoo, claiming that the committee meeting was delayed by a day at the behest of the Blue House to add pressure on Yoo to step down.

That accusation, he responded, had “a fallacy in logic.”

The chief of staff also adamantly refuted criticisms made by NPAD Rep. Choi Min-hee, who argued that President Park’s governing style was reminiscent of an authoritarian ruler’s and that she was attempting to exercise unrestrained authority.

“In contrast to what others outside [the Blue House] see, its decision-making process is not made in a closed-off or unilateral way,” Lee said.

Yoo, too, jumped to defend the Blue House amid NPAD lawmakers’ take on Park’s efforts to oust him, asking his fellow lawmakers “to display respect as members of the Assembly” for the president and concentrate on relevant issues.

Park’s open demand that Yoo step down has sparked questions over whether she might be overstepping her authority in violation of the separation of powers, as Yoo was elected floor leader by fellow party members just earlier this year.

The Blue House’s open disapproval of Yoo has also raised criticism among some observers that Park’s attitude is rooted in the politics of decades past, when the ruling party’s loyalty to the presidential office was demanded as well as taken for granted.