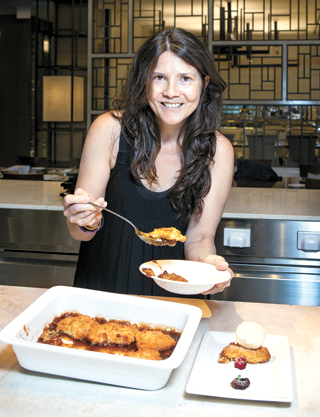 Lucie Tsai, wife of the Canadian ambassador to Seoul, serves freshly made pouding chomeur at the Grand InterContinental Seoul Parnas in southern Seoul. By Park Sang-moon

Lucie Tsai seemed anything but homesick when she arrived at the hotel for the cooking series, just four months after her arrival in Seoul. As wife of Canadian Ambassador Eric Walsh, the France-born vegetarian heard life in Korea would be tough, especially given the fact that many local dishes contain meat.

But while testing the water here by touring the capital, Tsai said she was certain she had been misled. At least for her, the endless lanes of street food were too good to be true.

“I’d cook in my own kitchen [if I grew sick of the local cuisine], but you just can’t get bored in a place like this!” she exclaimed, eyes widening as she went on describing her most coveted venue of all, the Gwangjang Market in eastern Seoul.

In showcasing Canadian cuisine, Tsai wanted to introduce a dessert that she considers quite similar to one of her favorite snacks here - hotteok, or Korean pancakes often filled with brown sugar and ground peanuts or sesame seeds.

Q. Why did you choose pouding chomeur? 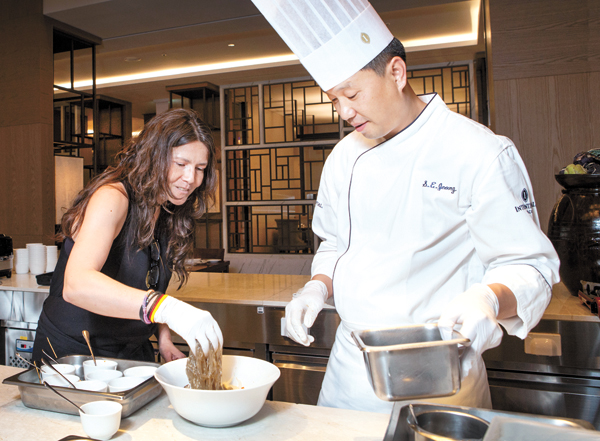 A. I remember the first time I tried this dessert, when a friend of mine from Quebec made it for me. I rarely ask people for their recipes, but I had to have this one. It’s not fancy or complicated, but simple, sweet, gooey and rich. The unique maple taste is irresistible. Most of all, it’s very easy to make, which is perfect for someone like me who doesn’t bake at all.

Is it a common Canadian dessert?

It’s quite common in Quebec, where it’s from, but I don’t think it’s well-known outside the province. Although I lived for a few years in Quebec, I had pouding chomeur for the first time only about four years ago in Berlin. My husband’s colleague from Quebec had us over for dinner and served it for dessert. His wife is the one who gave me the recipe and told me the story behind it.

Pouding chomeur, which means unemployed man's pudding but is known as poor man’s pudding, was invented during the Depression, some say by factory women, while others say by the wife of the then-mayor of Montreal. It was meant to be a comfort food that people could afford during hard times. Therefore, the ingredients were cheap and easily available, including brown sugar, flour, grease and maple syrup. Back then, maple syrup was cheaper that it is nowadays. 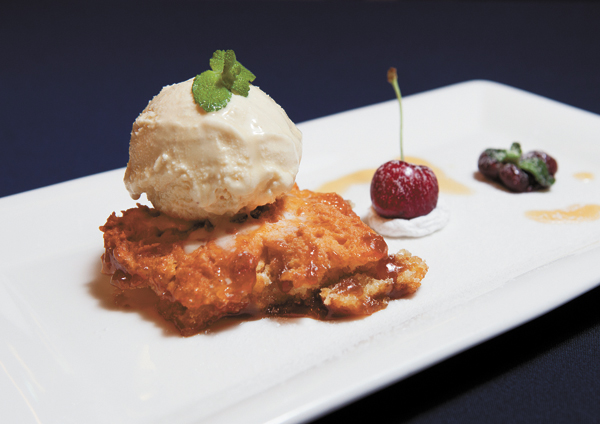 What aspect of Korean cuisine can you find in pouding chomeur?

One of my favorite Korean desserts, hotteok, reminds me a lot of pouding chomeur. It has a similar sweet, gooey sauce.

Canadian cuisine is really diverse, so difficult to define. Often, it is associated with particular ingredients found in Canada, with maple syrup being a good example. Other examples include Arctic char, Canadian bacon and Saskatoon berries. This is definitely one aspect of Canadian cuisine, but our culinary culture is much more than that. A former Canadian prime minister said it well when he said Canada has a cuisine of cuisines. There are the earliest Canadian cuisines of the Inuit, First Nations and Metis, as well as cuisines introduced by immigrants from all over the world.

Why is Canada so famous for maple syrup?

More than 70 percent of the world’s maple syrup comes from Canada, with most of that coming from Quebec. It has a unique flavor and is often added to pancakes, waffles ham, bacon, sausages and beans. 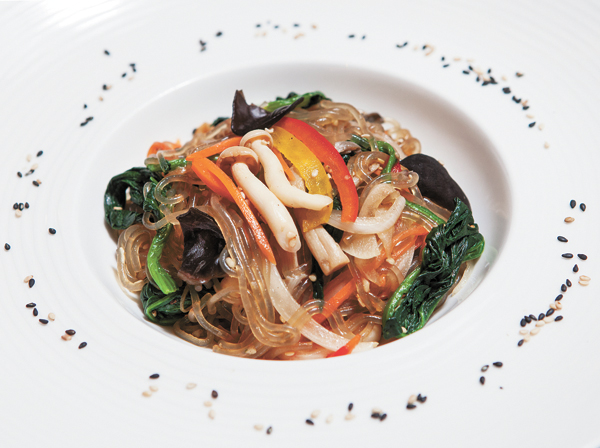 There is a short window of time in the spring when the temperature is just right and the maple sap runs. The sap is collected, heated up to remove the water, and transformed into maple syrup. Sugar shacks are great places to visit during this time. In maple tree forests, we can see how maple syrup was traditionally made, sample maple coffee and feast on rustic meals in a log cabin.

I’ve never spent much time in the kitchen, and I have spent even less time cooking since moving here earlier this year. I love eating the street food and discovering the great restaurants Seoul has to offer.

What ingredients are hard to find?

I’ve actually been eating a lot of Korean food so I’m not exactly sure which ingredients are difficult to find. I just returned from Canada and brought maple syrup and brown sugar back with me.

What ingredients from your country’s cuisine are easily found in Korea?

Because we have such a diverse and varied cuisine, many ingredients can be found here.

Do you have a favorite eatery in Seoul?

Wherever we are, my husband and I really enjoy discovering different vegetarian and vegan restaurants, and we do the same thing here. Temple food is one of our favorites.

What are your favorite kinds of street foods?

I’ve been told its difficult being a vegetarian in Korea, but it hasn’t been so bad. I have discovered some awesome veggie street food in Seoul. I love the various kinds of hotteok in Insa-dong in Jongno District. It’s fun because they’re not all the same. Some are light and crispy while others are heavier and chewy. Most are sweet, but I did find a salty hotteok filled with vegetables. All of them are delicious!

I am a huge fan of Gwangjang Market. Mung bean pancakes [nokdujeon], which are crispy on the outside while being tender and soft on the inside and full of flavor, are everywhere! They are really one of my favorite foods. If I’m lucky, I can find a free seat at one the eateries selling pumpkin soup [hobak juk] and enjoy a bowl of that, too. And finally on my list is mayak gimbap [mini-size rice, vegetable and seaweed rolls] and jumeokbap [rice balls]. They are great when I’m in a rush and have to eat on the go.

Bingsu [shaved ice flakes] is also one of my favorite treats. Not only is it very light and refreshing, but there is a delicious variety of flavors.

Please give us your personal observations of Korea, how it compares to your country or other countries in which you have lived.

We moved here in February, so unfortunately I haven’t had the pleasure yet to travel around the country. I have, however, tried a lot around Seoul. Seoul is a city of contrasts and surprises. You can be caught up in the noisy crowd of a local market, turn a corner, and find yourself in the tranquil park of an old shrine. The grand palaces of the emperors and empresses of yore coexist with the flashy, modern skyscrapers. Seoul is also a really fun city to explore. There’s just so much here that you will never run out of things to do.