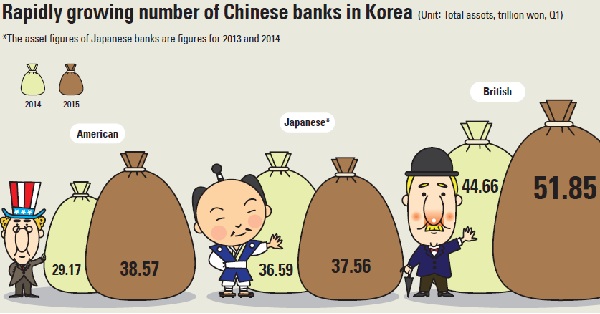 While Western banks, the main foreign financial corporations in Korea, struggle in the local market, financial companies from other Asian countries including China are showing interest.

Fubon Life Insurance on June 22 decided to invest 220 billion won ($196 million) in Hyundai Life Insurance. It was the first case of Taiwanese investment in a Korean financial company, according to analysts in the industry.

Fubon Life Insurance is the second biggest insurance company in Taiwan and the de facto holding company of Fuban Financial, the biggest financial company in Taiwan, which has about 200 trillion won in assets.

Anbang Insurance Group, one of China’s largest insurance companies, took over Tong Yang Life Insurance on June 10 in securing 63 percent of the Korean insurers’ stake. It is the first case of a Chinese company buying a Korean financial company.

The biggest bank in Indonesia, Bank Negara Indonesia (BNI) is also about to jump into the Korean market as the FSC preliminarily approved a license for a branch in Korea in April. 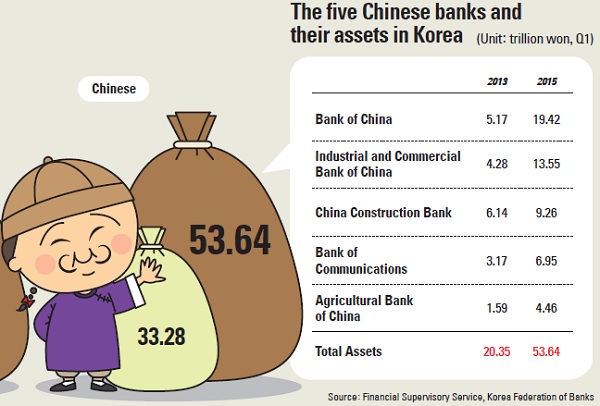 BNI has more than a thousand branches in Indonesia. It is targeting expatriates in Korea to provide them money transfer and currency exchange services.

Philippines Metrobank is the only Southeast Asian bank currently operating in Korea.

The State Bank of India (SBI), the biggest bank in India, is making inroads into Korea as well.

The SBI opened a Seoul office in 2013 and now the office is being converted into a branch to start business within this year.

The bank plans on providing trade finance services to Indian enterprises in Korea or Korean companies that have operations in India.

The Chinese banks’ assets were smaller than Japanese or British banks before 2013, but now they are larger. The sudden increase of assets in Chinese banks was largely due to the higher interest rate on their deposits. As the Chinese currency deposits is offering a yield that is one percentage point higher than the ones offered at Korean banks, Korean financial companies and institutional investors rush to sign up at the Chinese banks.

The strength of Asian financial corporations comes from their relatively high rates of economic growth, large and liquid domestic financial markets and their searches for new areas of growth.

However, some analysts raise the possibility of foreign corporations taking over the Korean market.

Also, there is the potential risk of Chinese capital taking over major Korean companies such as Woori Bank, KDB Daewoo Securities and ING Life Korea.

Domestic banks that have targeted foreign workers as a new pool of customers are now expected to compete with Southeast Asian and Indian banks.

But there are also positive reactions to foreign banks’ financial activities in Korea.

Some expect a “win-win” situation between Southeast Asia and Korea in terms of business in the future.

In fact, the opening of the BNI branch in Seoul was only allowed after Shinhan Bank won approval from Indonesian financial authorities to acquire Bank Metro Express (BME), a leading local bank in Jakarta back in April.

“Inroads by Asian financial corporations into Korea is neither a bad omen nor a preventable phenomenon,” a local financial authority said. “We can expect a synergy effect from their business.”