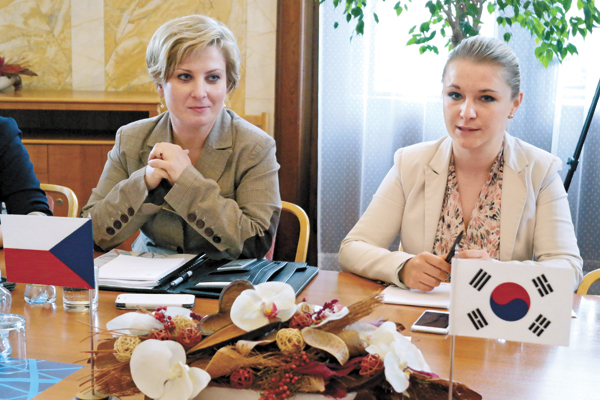 Lenka Kovacovska, director of the Department of Strategy and International Cooperation in Energy at the Ministry of Industry and Trade of the Czech Republic, speaks at a press meeting with Korean reporters at the ministry’s office in Prague on June 26.[Provided by Korea Nuclear Energy Promotion Agency]

The decision comes as other European nations are phasing out nuclear power, citing its cost and related safety issues.

The Czech cabinet passed its long-term plan for the nation’s energy use, dubbed the Security Energy Concept, said Lenka Kovacovska, a director at the Ministry of Industry and Trade of the Czech Republic, in an interview with Korean reporters.

“On May 28, the Security Energy Concept - the basic energy plan until 2040 - was finally approved [by the cabinet],” said Kovacovska on June 26. “Its primary purpose is to ensure enough energy resources [to meet] domestic demand.”

Under the plan, the Czech government aims to make nuclear energy account for 58 percent of the nation’s total supply, up from 30 percent. It also plans to increase the ratio of renewable energy to 25 percent.

Currently, 60 percent of the nation’s energy comes from coal, the official said, but the Czech government is planning to reduce its use to 11 percent by 2040.

“One statistic said the natural resources of the Czech Republic would be exhausted sometime between 2023 and 2025 if the government doesn’t have a special plan,” she said. “So we are focusing on nurturing renewable energy and increasing our use of nuclear power.

“As Czech doesn’t have a sea, we can’t get any energy resources from there,” she added. “We could probably use natural gas, but it costs a lot to import and is also risky for the country’s energy security.

“So rather than developing new energy resources, we are mulling over the renewal of our current energy sources,” she said.

“The oldest reactor among the four units in Dukovany has been running for more than 30 years,” she said. “The second-oldest is also 25 years old, and the other two have been operating since 1987.

“When they were built, laws at the time capped the operation of the reactors to 30 years,” she said, “but we developed a program to extend their lifespans ... to 2037.”

The Czech Republic has majority support for nuclear power, unlike other European countries like Germany and France, she said.

“In the aftermath of the Fukushima nuclear disaster, polls said public support for nuclear energy use fell below 60 percent for a couple of months,” she said.

“However, except for that period, more than 60 percent of Czech people have always supported nuclear power. It’s because unlike other European countries, there is no alternative resource except nuclear power for the Czech Republic.”