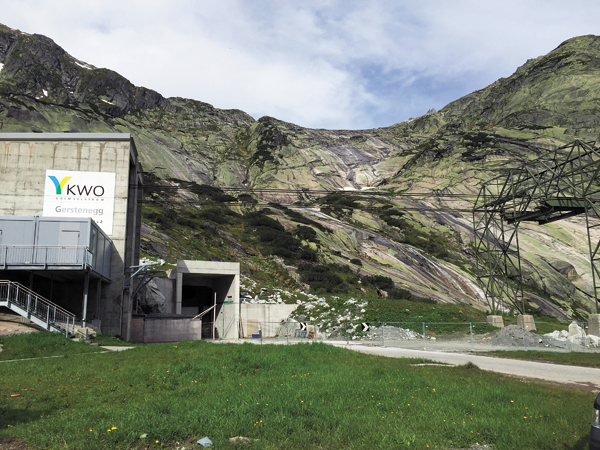 The entrance to the Grimsel Test Site is located in the Aarmassif part of the Swiss Alps. There is no sign at the entry. The tunnel was originally built for the KWO hydroelectric power plant.

Near BERN, Switzerland - The Grimsel Test Site, a research facility in Switzerland to study possible ways to permanently dispose of radioactive waste from nuclear power plants, is not in a building or complex.

Recently, officials from the National Cooperative for the Disposal of Radioactive Waste (Nagra) gave a tour of the facility to journalists from Korea, which is wrestling with the same dilemma: what to do with the byproducts of their nuclear power plants, especially materials that will stay radioactive for thousands of years.

It can’t be a disposal site because geologically, the Alps are still in a state of dynamism because of the movement of the tectonic plates. “The Africa continent is still pushing Europe and the Alps are still growing,” Blechschmidt said. “After thousands years, any underground depository facility here might not be underground anymore, and could be exposed to surface.”

Located in the Aarmassif part of the Alps, the site is 450 meters below the peak. There is no sign for the facility. The tunnel was drilled originally for a hydroelectric power plant located right next to the facility. But the studies at the Grimsel test site have no connection with the power plant.

Established in 1984, the core task of the test site is to select a permanent disposal repository for radioactive waste generated in the country’s nuclear reactors, and construct and operate it if it is approved. Simulation studies and experiments are also underway on storing radioactive waste with three sets of barriers - containers, bentonite and rock - deep underground ,and checking and monitoring its safety. 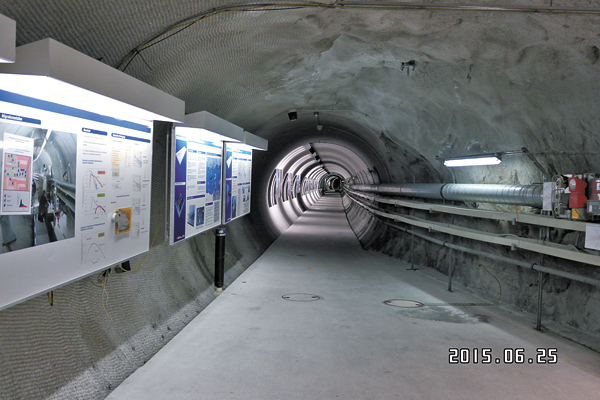 Under Swiss law, all radioactive waste should be buried in a deep underground repository. One of the big questions for Switzerland, as for other countries around the world, is where to safely bury the highly toxic waste.

“On January 30, we zeroed in on two candidates from six possible places for permanent disposal repositories, Zurich Nordost and Jura Ost,” Blechschmidt said. “We are planning to construct two disposal facilities, one for spent fuel and high-level waste, and one for low- and intermediate-level waste.”

Now that final sites are tentatively selected, a nationwide referendum will be held around 2027, according to Nagra’s plan. After that, the Federal Department of the Environment, Transport, Energy and Communications will approve construction and operation of the facilities at the site.

If the public supports the disposal plan, the permanent disposal facilities will start operating around 2050 for low-level waste and 2060 for high-level waste.

When the permanent repository is completed, all of the waste will be moved from the interim repositories.

Burying the radioactive waste will be possible with two barriers: the geological barrier of the granite in the mountain, and engineered barriers, meaning containers and materials wrapped around the waste.

First, a glass container will hold the radioactive waste, and it will be put into a steel container. The steel will be surrounded by bentonite, a special clay mixed with sand that absorbs water from rocks surrounding the container. The clay swells and seals the toxic materials inside. 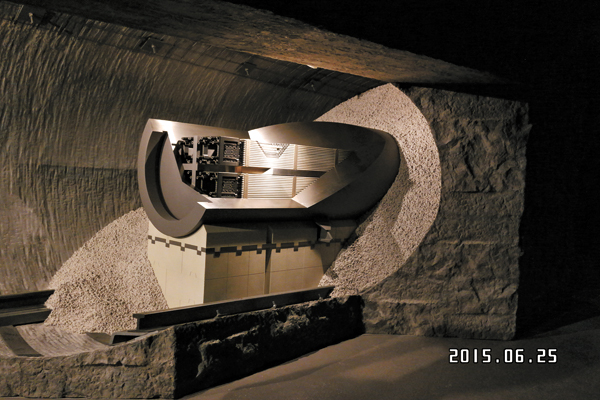 A three-barrier repository system studied at the Grimsel site. A glass container is placed into a steel container and surrounded by a special clay.[Provided by Korea Nuclear Energy Promotion Agency]

“It is dry at first,” Blechschmidt said. “However, around the rock, there is a lot of water. As soon as you bury this waste, water comes into the bentonite from the rock.

“After we close the repository, nature will take care of it,” he said.

Researchers at the test site have also started gas experiments to simulate gases expected to come from the waste after the containers are buried.

“We simulate a situation we expect hundreds of years after the repository has been filled,” Blechschmidt said. “We inject some gases from an outside system and monitor how the gases move by using hundreds of censors. Some low-level radioactive waste will emit gas from organic materials after they are put in the repository.”

But the Grimsel facility doesn’t use real radioactive waste for its tests, Blechschmidt said.

“We carry out simulations only, using a radioactive element, a radionuclide,” he said.

Although the Grimsel Test Site researchers are studying granite as a possible rock to store radioactive wastes, an increasing number of researchers in Switzerland are also studying so-called Opalinus Clay, a special clay recently discovered.

According to a report by Nagra, the focus of the investigations by researchers for a possible rock for radioactive wastes repositories shifted in the 1990s to the clay, which was formed around 180 million years ago by deposits of mud in the Jurassic period.

The clay has a capacity of isolating itself from surrounding materials and extremely low hydraulic permeability. It swells on contact with water or humid air so it can seal and block anything from leaking.

The fact that the clay is also found in very deep underground layers, about 900 meters in a band of about 100 meters, means it could be suitable for storing high-level waste.

Studies on Opalinus Clay are being carried out at another underground rock laboratory in Switzerland called the Mont Terri Site. The final two regions selected for permanent disposal sites - Zurich Nordost and Jura Ost - are characterized by that form of clay.

The Grimsel site is still working because of its international partnership with other countries that are studying granite, like Sweden Korea, and Japan.