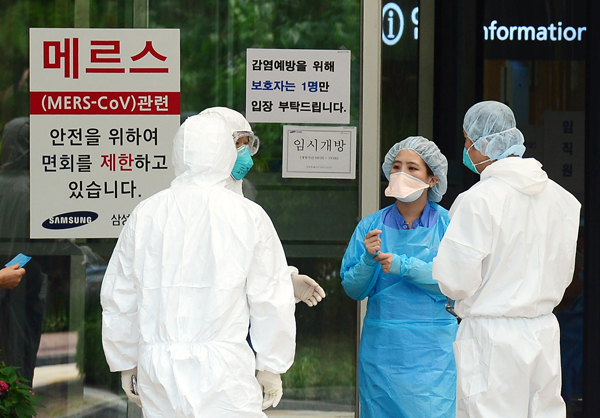 Medical workers talk at the entrance of the Samsung Medical Center yesterday. The Ministry of Health said a 50-year-old woman who was treated at the hospital’s cancer ward in late June was confirmed as having MERS. [NEWSIS]

The Middle East respiratory syndrome (MERS) outbreak in Korea, which was once believed to have been well under control, is still claiming new victims at Samsung Medical Center, which earlier promised full cooperation with the health authorities after becoming the epicenter of the disease’s spread in Korea.

After reporting no new confirmed MERS cases from Sunday to Wednesday of last week, the Ministry of Health and Welfare has announced a new patient a day since then, raising the total number of sufferers to 186.

Patients Nos. 183 and 184 are nurses and Patient No. 185 is a doctor at Samsung Medical Center. Epidemiological studies of Patient No. 186 are being worked up, but she is likely to have contracted MERS at the same hospital.

Samsung Electronics’ Vice Chairman Jay Y. Lee, the eldest son of Samsung Chairman Lee Kun-hee, earlier delivered an unprecedented apology for the large number of MERS transmissions within the hospital and promised to give MERS patients the best of care and he will be given no more chances to keep his promise. All MERS patients have been moved out of the hospital, seen as one of the country’s best, over the weekend in an attempt to prevent any more transmissions there.

“We’ve completed transferring all confirmed MERS patients [under treatment] to other state-designated quarantine facilities,” said Kwon Deok-cheol, the general director of the government’s MERS countermeasures headquarters, on Sunday. “There are no MERS patients at Samsung Medical Center at this moment.”

Sixteen patients were earlier treated at the hospital, including three in critical condition. One of them was discharged last weekend and 15 others moved to other medical facilities.

The result of epidemiological studies on Patient No. 186, a 50-year-old woman and Patient No. 132’s wife, is expected to determine the level of quarantine measures required at Samsung Medical Center, which is partially and indefinitely closed now.

Her husband was treated at the emergency room on May 27 and 28 while the “super-spreader” Patient No. 14 was there. He was confirmed as having MERS on June 12 and was hospitalized; his wife was under quarantine at home from June 13 to June 26. But after she was released from quarantine, she visited Samsung Medical Center for cancer treatment on June 29.

“Patient No. 186 stayed at the cancer ward of Samsung Medical Center for about four hours,” said Jeong Eun-gyeong, an official with the Korean Centers for Disease Control and Prevention (CDC). “At that time, her body temperature was normal and she did not have any respiratory symptoms.”

Because she developed symptoms far after the latency period of two weeks since her last physical contact with her husband on June 12, it is more probable that she contracted the disease when she visited the hospital at the end of last month.

If the tests confirm that supposition, she would become the second person to have been infected at the hospital’s cancer ward.

The first was Patient No. 166, a 62-year-old man who was discharged from the hospital on Thursday.

His MERS infection was confirmed on June 18 after he cared for his wife at the cancer ward from May 25 to June 5.

How he contracted the disease is still unknown, and the health ministry has only said that they are still conducting an epidemiological investigation.