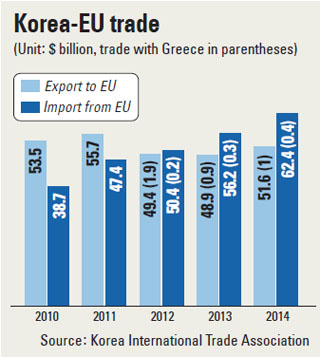 The Korean stock market immediately responded to the Greek vote against further austerity on Monday.

Seoul wasn’t the only market that panicked at the news. Tokyo’s market lost more than 2 percent, and Hong Kong’s Hang Seng dropped 3.18 percent.

The government’s major economic bodies - the Finance Ministry, Financial Services Commission and the Bank of Korea - immediately held a meeting to discuss the situation.

“There’s now the possibility that the volatility of the international financial market, including in Korea, could expand,” said Vice Finance Minister Joo Hyung-hwan at the meeting.

“And the situation could head in a direction we haven’t been expecting. We need to closely monitor the position of creditors, including Germany and France, and keep in mind that the Greek situation could further spread throughout global market.”

Korean analysts agreed that the current situation in the eurozone will affect the local market, but were split on whether or not that impact would be limited.

Huh Jae-hwan, a researcher at KDB Daewoo Securities, said the euro is likely to weaken against the dollar and yen due to uncertainty about a Greek exit from the eurozone.

However, the Korea Development Institute said Monday that the Greek crisis is unlikely to influence other euro zone economies because, though most European countries trade with Greece, they don’t have much currency exposure with the country.

But in contrast to KDI’s sanguine outlook, the Korea Economic Research Institute in a report yesterday said it expects Korean economic growth this year to drop 0.28 percentage points and the local stock market to fall 7.6 percent if the Greek crisis reaches a level similar to 2010.

If the situation continues past a year, Korean GDP growth could see a sharper drop of 2.7 percentage points, and stock prices could nosedive 26.5 percent, the institute said.

“The risks to European financial market are estimated to be smaller than in the past Greek crisis, as major creditors like the European Central Bank and International Monetary Fund are public,” said Kim Seong-hoon, a senior researcher at KERI.

“But the potential possibility of the Greek exit shouldn’t be underestimated as it means a failure of the eurozone system.”

Several analysts also warned of the impact the situation could have on Korean exporters.

“The chaotic economic atmosphere in Greece is expected to continue for a while due to Sunday’s referendum results,” Park Ki-won, head of the Korea Trade-Investment Promotion Agency’s Athens branch, wrote in the report released yesterday. “The possibility of Greece exiting the eurozone can’t be set aside, so local industries should keep an eye on it.”

Park said the Greek crisis is unlikely to have a huge effect on Korea since the country accounts for only 0.13 percent of Korea’s total trade.

However, Park warned that the situation may dampen the overall European economy and further weaken the euro, which could affect Korea’s exports to the region.

Park said the industry most likely to suffer a direct hit from the Greek crisis is the shipbuilding industry, as Greek buyers won’t be able to pay Korean manufacturers if banks there continue to shut down.

Daewoo Shipbuilding and Marine Engineering has about 20 percent of its total orders come from Greece, but the company says existing contracts won’t be influenced by the crisis since many Greek companies register and finance their ships in other countries.

“But if the crisis continues in the long term, it may result in a declining numbers of orders,” a spokesman at Daewoo said.

Other industries, including automotives, electronics, petrochemicals and construction, are also expected to face a tough second half if Europe struggles.

“The Greek crisis may be a factor that weakens the euro and therefore weakens the overall export competitiveness of Korean automakers,” a spokesperson from Hyundai Motor said.

The representative quickly added that Hyundai was ready to respond flexibly to any change in the situation, with production lines ready to meet demand from other European countries.