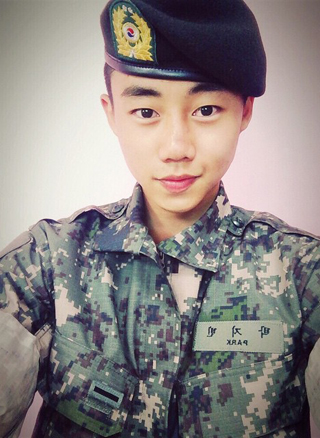 Park Ji-bin of the movie “Hello Brother” (2005) has been assigned to serve his military service in Jeungpyeong County, North Chungcheong, according to a Korean media outlet on Monday.

The TV personality completed his basic military training on May 26 and held the completion ceremony on Thursday. To mark the ceremony, he posted a selfie of himself on his Instagram account and thanked his family and friends who came to visit him on the day of the event.

The 20-year-old actor originally planned to enlist in the military last year. The plan, however, got delayed until May of this year because his father unexpectedly passed away last June.

The musical “Tommy” staged in 2001 was Park’s first project as an actor. Since then, he has become a familiar presence on TV, acting in such series as “Queen Seondeok” (2009), “Empress Cheonchu” (2009) and “May Queen” (2012), mostly taking on the role of the main character’s childhood persona.

The actor also amassed a huge following through the silver screen. A few of the films he appeared in include “Almost Love” (2006), “Miracle: Bicycle Looking for a Whale” (2011) and “Children of Heaven” (2012).