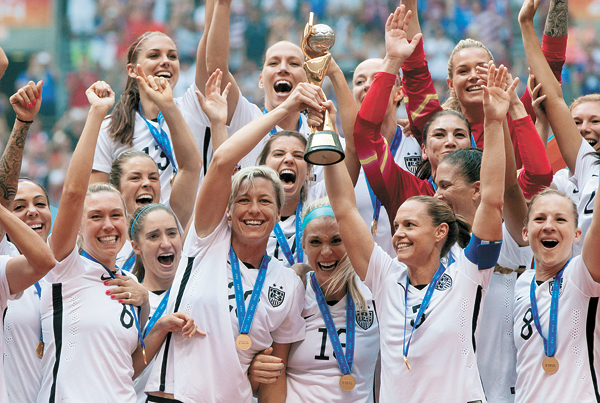 The United States Women’s National Team celebrates with the trophy after they defeated Japan 5-2 in the FIFA Women’s World Cup in Vancouver, Canada on Sunday. [AP/NEWSIS]

VANCOUVER, British Columbia - Carli Lloyd lives for the big moment. She had her biggest on Sunday night - and gave the United States its third Women’s World Cup title.

Lloyd scored three times as the United States jumped to a four-goal lead in the first 16 minutes, and the Americans overwhelmed defending champion Japan 5-2 for the team’s first World Cup championship since 1999, and record third overall.

A sellout crowd of 53,341 roared in approval for Lloyd’s hat trick, the first ever in a Women’s World Cup final.

“It’s been a long journey, my career. I’ve had a lot of people believe in me, in my corner, from day one,” the 32-year-old midfielder said. “I’ve dedicated my whole life to this. Everything else comes second. But I wouldn’t want to do it any other way.”

Lloyd, awarded the Golden Ball as player of the tournament, scored twice in a span of about 135 seconds as the United States led 2-0 by the fifth minute.

Lauren Holiday boosted the lead in the 14th and two minutes later Lloyd made it 4-0 with an audacious 54-yard, shot from midfield that sailed over goalkeeper Ayumi Kaihori.

Japan closed on Yuki Ogimi’s goal in the 27th and an own goal by Julie Johnston on an errant header in the 52nd. Tobin Heath scored two minutes later, the third goal off a restart for the Americans.

She put the U.S. ahead in the third minute off a corner kick from Megan Rapinoe.

She made it 2-0 after Holiday took a free kick from the flank and Johnston made a back-heel flick to Lloyd, who was 2 yards out. With her right foot, she poked the ball between two defenders and past Kaihori.

It was the fastest hat trick in World Cup history - men or women - and Lloyd became the first American since Michelle Akers in 1991 to score multiple goals in a World Cup final.

“Speechless. Honestly, I’m so proud of this team,” an emotional Lloyd said. “This doesn’t feel real. It hasn’t sunk in. So unbelievably proud of every single person on this team. We just made history.”