A French hamlet fights for nukes

A French hamlet fights for nukes 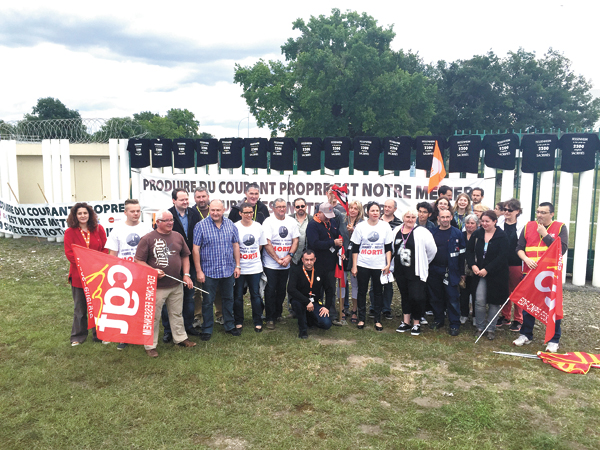 Workers at the nuclear power plant in Fessenheim, France, stage a rally on June 22 in front of Electricite de France, the state-run electricity company of France, against President Francois Hollande’s plan for shutting down the country’s oldest power plant. Provided by the Korea Nuclear Energy Agency

FESSENHEIM, France - “Ensemble, preservons la centrale nucleaire” (Let’s preserve the nuclear power plants) is a catchphrase written on a banner in front of the city government offices of this town in northeastern France. It represents the voices of local residents who want to preserve the country’s oldest nuclear power plants, which are located in the town.

Despite environmentalists’ calls for shutting down the plants, built in 1977, particularly in the aftermath of the recent nuclear disaster in Japan, residents say the plants are safe and they need them for their livelihood.

There is no doubt that the nuclear plants have brought economic prosperity to this small town, which lacks any significant tourist attractions or natural resources. Of the 2,300 residents here, half work at the plants or are families of workers there. The remaining half make their living by providing goods and services to the power plant workers. The two reactors are a stone’s throw from the German border as well as Switzerland.

Just a few kilometers from the city offices, about 50 people staged a rally in front of Fessenheim’s two nuclear power units at the edge of the city to protest the national government’s plan to shutter the plants in the near future.

“It’s a political decision by President Hollande,” said Annick Waller, a middle-aged worker who said she had worked at the plants for the past 18 years as a safety manager. “It’s an attempt to get votes for the Socialist Party.”

Thierry Littler, a 38-year-old official with the city council, said his office wanted to block those plans. “Our local council is sponsoring this protest,” he said. “The Fessenheim nuclear power plants are not dangerous at all, and they offer a significant amount of benefits for us.

Shutting down the 38-year-old nuclear power plants was a key pledge by Francois Hollande when he was running for president in 2012. He promised to close them down by December 2016 and reduce the country’s use of nuclear energy by half.

But residents here want their plants to continue in operation, said Mayor Claude Brender, not only because they depend on the plants to keep the local economy afloat.

“About 90 percent of our citizens want to protect the nuclear power plants,” he said. “Since they were built in 1977, the city has developed significantly. We have two elementary schools, a public sports center, a child care center and even a museum that was recently opened. All of this growth was thanks to the power plants.”

“If the plants indeed close down, there are no other industries that would come into this town now,” he said. “We have no solutions for offsetting a shutdown.”

The mayor, elected in 2014, said there are no safety concerns about the plants. “We check and replace components of the plants every decade,” he said. “There is no problem in safety.”

The mayor accused Germans and Swiss across the nearby borders of stirring up protests. “About 80 percent of the supporters of the shutdown of the Fessenheim plants are German or Swiss, and there are many Germans in particular staging anti-nuclear rallies,” he said. “A third of the nuclear energy produced by the Fessenheim is, in fact, exported to Germany or Switzerland.”

Despite the pledge by Hollande and the majority French support for the shutdown of the plants, the mayor said he didn’t believe the Hollande government would follow through.

“Although the government forced the decision on us, it can’t unilaterally close the plants down without legislation,” he said. “There will be a presidential election in 2017, and we hope the new administration will protect the plants. Hollande always says he will shut down the plants, but he has never said exactly when that would be.”