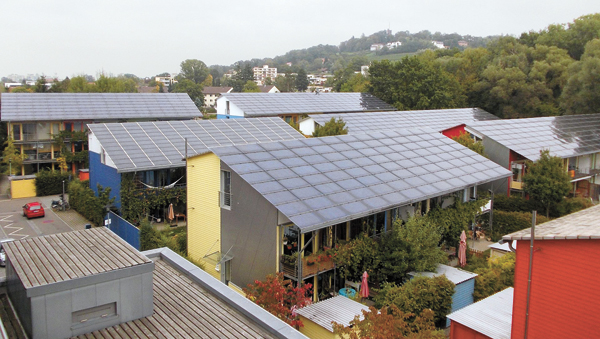 FREIBRUG, Germany - A house with panels that track the sun, self-sufficient solar-powered houses and passive buildings without heating systems for the winter - those innovative ideas were all proven to be possible and cost-effective in the town of Vauban, Germany’s “green town.”

Located in Freibrug, 3 kilometers (1.9 miles) from the city center, the 41-hectare (101-acre) village has about 5,500 residents and was once a base for French military occupation forces after World War II. After the French troops were withdrawn in 1992, the town was turned into a model of eco-friendly development in Europe.

One important element in the development history of Vauban is that the green city came about not by government edict but by the work of a group of local residents who formed the Forum Vauban in 1994. The nonprofit group was set up to guide development in eco-friendly ways as a model for the rest of Europe. In 1995, the Freibrug city government approved the forum as a legal body.

“Vauban village is the first eco-town in the world that uses renewable energy,” said Thierry Casetou, a member of the executive board of the Innovation Academy in Freibrug, who led a media tour for Korean reporters on June 22. “Many countries are trying to benchmark their development against the success of the Vauban village, and other regions in Germany are in the process of similar projects.”

The first place he led the group to was the “plus-energy houses” site, a cluster of two-story multifamily houses that produce all electricity they use from solar panels attached to the roofs. About 60 households are in that cluster.

“They produce energy with the solar panels only and sell the excess electricity to local electrical utilities,” Casetou said. “By selling the surplus energy, each household earns about 300 euros [$331] a month.”

The wooden, two-story, two-family buildings are a remodeled version of so-called “passive houses,” apartment blocks that have superior insulation and no active heating units. The apartments, which have also been constructed near the plus-energy houses, have 30-centimeter (12-inch) thick plywood walls, triple-glazed windows, and other insulation.

The plus-energy houses add to that emphasis on insulation by putting solar panels on the roofs, Casetau said. But unlike the most common technique in Korea, fitting the panels in a steel frame before mounting them with an air gap above the roof, these panels are attached directly to the roof during construction of the buildings, lowering the installation cost substantially. Casetou added that the solar panels also act to further insulate the roof.

“Passive houses and plus-energy houses are similar to each other,” Casetou said. “Although it might seem costly to build solar panels on houses, in fact, the construction cost for the houses here is cheaper than for normal houses in Freiburg. Housing prices here are cheaper than for those houses.”

After visiting the plus-energy and passive houses, the final stop was the Heliotrope, a home designed to squeeze every possible bit of energy from the environment.

Constructed by German architect Rolf Disch, who lives in the structure, the cylindrical building is a 14-meter-high column with a diameter of 2.9 meters, sporting two-axis photovoltaic panels on its roof.

The computer-controlled solar panels rotate 15 degrees per hour, following the sun throughout the day automatically by changing their elevation and azimuth to point directly at the sun. In fact, what actually rotates is the panel, not the house entirely.

The external balcony floors are made of a series glass tubes to collect solar heat for hot water. Windows are made of three-ply heat-absorbing glass. To prevent the building from overheating, the glass tube balconies act as sunshades over the windows in the summer.

Besides the innovative solar-powered structures, Vauban is also a nearly car-free city. Automobiles are banned on some streets where children can freely play. Residents are urged to use trams or bicycles instead of their own cars, and some houses have no private parking lots.

“Under German law, all houses and buildings should have parking, but Vauban village is an exception,” Casetou said. “If residents don’t have a car, they don’t need a place to park and residential areas can be larger.

“For outside visitors, parking is allowed only at the one public parking lot in the town,” he said. “Parking for some visitors is allowed temporarily, such as for handicapped people or for unloading heavy loads. As a result, only 17 percent of the 5,500 residents have their own cars, which is much lower than the average for car ownership in the country.”