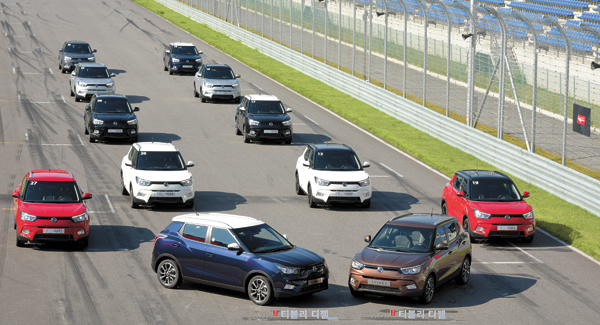 Ssangyong Motor’s Tivoli on a race track in Inje, Gangwon, on Monday. Provided by the company

Inje, GANGWON - Six months after introducing the small size SUV Tivoli, Ssangyong Motor has rolled out the car’s diesel model with the goal of expanding its share in the compact SUV market.

In the launch at auto theme park Speedium in Inje, Gangwon Thursday, the nation’s smallest automaker introduced the diesel Tivoli, which the company said offers fuel efficiency and a strong driving performance.

The gasoline-engine Tivoli was rolled out in January and marked Ssangyong’s first step toward regaining competitiveness and recognition as a decent SUV maker, after years of painstaking restructuring to overcome financial hardships.

The latest version of Ssangyong’s best-selling SUV is the automaker’s most significant move for the second half of the year.

The diesel model features the e-XDi160 engine, which the company says took three years to develop. It features 115 horse power and 30.6 kilograms-meter of torque (221.3 pounds-feet), with a fuel efficiency 15.3 kilometers per liter (9.5 miles to 0.2 gallon). The engine has a six-speed automatic transmission manufactured by Aisin, which the company says is also used by popular global automakers like BMW, Toyota, Volkswagen and Audi.

The diesel model is front-wheel drive, and the company says it is developing a four-wheel driving system but does not yet have a release date.

The Tivoli diesel comes in three trims: the TX (20.45 million won), VX (22.85 million won) and LX (24.95 million won. The company has also started selling a four-wheel drive version of the gas engine Tivoli, which the company said offers better driving performance both on- and off-road with a smart 4WD system that automatically distributes power to the wheels depending on driving conditions.

In the past six months, the Tivoli led Ssangyong’s sales. Through June, the company sold a total 45,410 cars in Korea, with 18,524 of them being Tivolis. Cumulative sales through the month rose by 36.6 percent from a year ago. In June, the company sold 8,420 vehicles - a 63.3 percent increase compared to the same period last year - and 3,630 of them were Tivolis. The June figure was the company’s highest monthly sales since 2005.

Ssangyong hopes the Tivoli will reinvigorate its exports, which have struggled recently. It began exporting the Tivoli to Europe and Latin America in March. Through June, the company sold 24,390 cars, with 8,481 being Tivolis.

The cumulative sales figure dropped by 40.5 percent from a year earlier, but the company expects a boost in the global market from the model.