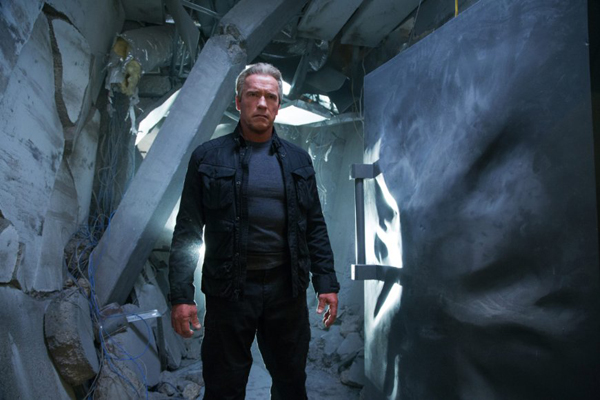 Arnold Schwarzenegger plays the iconic Terminator in the fifth installment of the franchise, “Terminator Genisys.” It opened in first place in Korea’s weekend box office. Provided by the distributor

According to the state-run Korean Film Council on Monday, the fifth installment of the “Terminator” franchise was able to attract more than 1.2 million viewers on its opening weekend.

The film depicts a destructive fight between humankind and robotic troops led by an artificial intelligence called Skynet.

Clarke plays the iconic Sarah Conner while Schwarzenegger is back in his old robot suit. Korean actor Lee Byung-hun also appears as an upgraded Terminator T-1000 in the first half of the movie.

In the No. 2 spot at the box office was Kim Hak-soon’s controversial movie, “Northern Limit Line,” which revisits the Second Battle of Yeonpyeong that occurred in 2002.

Shedding new light on the deadly maritime battle with North Korea, which was overshadowed by the Korea-Japan World Cup match at the time, the film is being praised for portraying the naval fight with much reality and drama.

However, it has also drawn public criticism for monopolizing screens after showing on more than 1,000 screens nationwide on its fifth day, while Kim Sung-je’s “Minority Opinion,” which was released on the same day, was only able to occupy some 400 screens.

Since its release on June 24, “Northern Limit Line” has been seen by more than 3.2 million moviegoers, earning 24 billion won so far.

On the other hand, “Minority Opinion,” which centers on what has been called the “Yongsan tragedy” - a head-to-head confrontation between a group of evicted tenants and policemen that resulted in the death of five civilians and one police officer - took in 36,443 admissions during the weekend, landing in fifth place. Its two-week total is now 337,000 moviegoers or 2.5 billion won in sales.

Meanwhile, Universal’s “Jurassic World” cooled off a bit but was still going strong in third place with 352,810 admissions. Its month-long total is now five million tickets sold or 43 billion won.