Lies told about me to the boss

Lies told about me to the boss 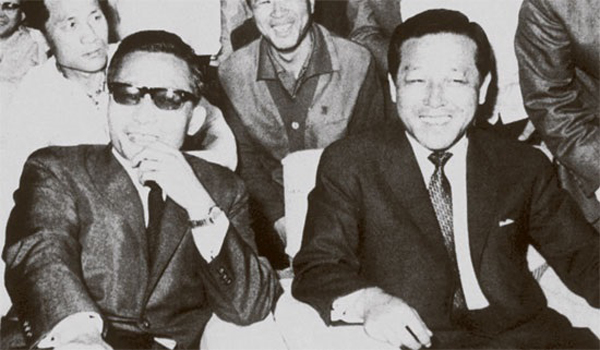 President Park Chung Hee, left, and Kim Jong-pil watch the counting of votes on election night on May 3, 1967 at the headquarters of the Democratic Republican Party. Park handily won the election for his second-term by a margin of 1.16 million votes. [JoongAng Photo]

Park Chung Hee had a renewed sense of confidence in his leadership after he was elected president two years after the May 16 military revolution [the 1961 coup]. Although he was elected to the highest office with the full backing of the Democratic Republican Party (DRP) in October 1963, he preferred dividing power among the main spy agency, the office of the presidential chief of staff and his cabinet agencies - and refrained from giving it to the DRP. Park found it annoying that ruling party lawmakers sometimes challenged his decisions. The strongman preferred subordinates who would take his orders without questions and execute them just as he intended.

He also utilized divide and rule tactics, allowing his subordinates to compete with each other to win his trust.

For example, Park would tell Kim Hyung-wook, who headed the Korean Central Intelligence Agency in the late 1960s, that I was eager to strip him of power. Kim would look for ways to weaken my power such as by finding any examples of corruption. Park intentionally sowed distrust among his subordinates so they would not collude to weaken his own power.

In December 1965, Park, who was also president of the ruling party, appointed me as chairman, the No. 2 position after his. But there were many factions who could not wait to diminish my influence and status. There was the so-called TK Group, led by Kim Sung-kon, and the Korean Central Intelligence Agency, headed by Kim Hyung-wook. They kept track of my every movement in efforts to keep me in check. President Park also used intelligence gathered on me to monitor my political moves. 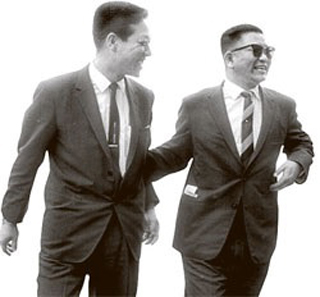 Kim Jong-pil, left, greets Kim Hyung-wook at Gimpo International Airport in July 1962 as the latter returned to Korea from a trip to Europe.[National Archives of Korea]

Then came a major scandal in May 1968 that led to Park suspecting that I was looking to succeed him as president in the 1971 election. Kim Hyung-wook, who at the time headed the spy agency, announced a bombshell revelation to President Park that I had formed a secret faction with lawmakers with the aim of running for president. Kim alleged that the pro-Kim Jong-pil faction even drafted a declaration saying I was their only choice - their only hope - for president.

I had never even heard of a pro-Kim Jong-pil faction. The spy agency fabricated their investigation to push me out. Kim Hyung-wook personally briefed President Park on the allegations and accused me of being ravenous for power.

In his memoir, Kim Hyung-wook claimed he had been ordered by President Park to dig up information about me, quoting Park as saying, “I’ve heard Kim Jong-pil was trying to form an internal faction with his confidant Kim Yong-tae at the helm to prepare his presidential campaign in 1971. Go ahead and investigate and report back to me.”

That was a flat-out lie; Park did not give such an order to Kim. Kim’s memoir was full of fabrications and distortions. His memoir also says that I told Lee Byung-chull, the founder of Samsung Group, about my plan to block Park’s attempt to amend the Constitution to run for a third term. That was also a fabrication.

Going back to the so-called pro-Kim Jong-pil faction inside the DRP, I paid visits to Park Chung Hee at the Blue House two days in a row on May 17 and 18.

On May 17, Park showed me a report submitted by Kim Hyung-wook, entitled People’s Welfare Association, referring to the so-called pro-Kim Jong-pil group.

“Kim just gave me a briefing based on this report. What do you know about it?” he asked.

I told Park that I would find out about it. I met Kim Yong-tae, whom Kim identified as the leader of the faction committed to supporting me for president.

“We did form a group but it is an entirely friendly group. It has no political motive,” Kim Yong-tae explained. “We talked about potential presidential hopefuls in personal chats. There is nothing more than that. Kim Hyung-wook made it all up.”

I met President Park the next day again and told him.

Park was not so convinced. “That’s not what I heard,” he said. “I heard you were now in the middle of forging your support group so that you could run in the 1971 election instead of me.”

I was speechless. After a few minutes, I countered by saying, “If I had thought of that, I would have told you about my plan first. I have no intention whatsoever to run for president and shunting you aside. I joined politics with a firm faith in you and I still have it. But it is totally my fault that you suspect me because of Kim Hyung-wook’s report. Forgive me for my shortcomings. I have never harbored such thoughts.”

After leaving the Blue House, I was enraged with the people trying to undermine my standing. They had succeeded to the extent that President Park had doubts about my loyalty to him.

So I decided to leave politics once again, thinking I had accomplished my initial goal by contributing to setting up the Park Chung Hee government and the DRP.

On May 30, I announced my plan to resign from all of my positions in the party and government. I was disillusioned by the endless struggles for power and efforts to paint my every move as being political.

Reporter Kim Jin-bae of the Dong-A Ilbo asked me why I chose to step down after putting so much effort into setting up Park’s administration.

“A carpenter does not build a house for himself to live in,” I replied.