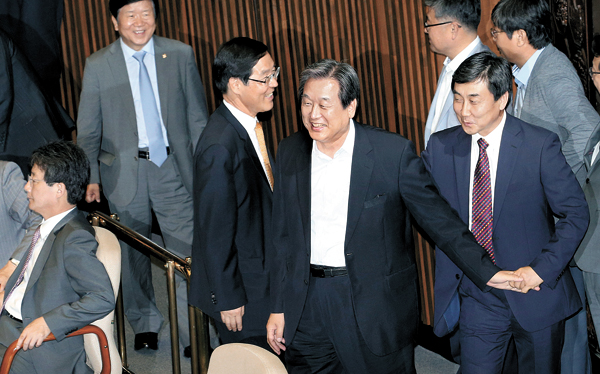 Rep. Lee Jong-kul, floor leader of the opposition New Politics Alliance for Democracy, far right, pulls the hand of Rep. Kim Moo-sung, chairman of the ruling Saenuri Party, to urge him to participate in the voting of the National Assembly revision bill on Monday. By Kim Kyung-bin

The National Assembly’s attempt to override a presidential veto of a contentious revision to the law governing the legislature failed Monday as ruling party lawmakers boycotted the voting in an attempt to repair their broken relationship with the Blue House.

The session started Monday afternoon and National Assembly Speaker Chung Ui-hwa introduced the revision to the National Assembly Act for reconsideration and another vote. According to the Constitution, repassing the bill requires the attendance of more than one-half of the total members, and a vote of two-thirds or more of the members present.

The revision to the National Assembly Act strengthened the lawmakers’ authority to demand a change in administrative legislation, such as presidential decrees. President Park Geun-hye called the change “unconstitutional” and sent the bill back to the legislature for reconsideration last month.

The National Assembly currently has 298 members. The ruling Saenuri Party occupies 160 seats while the main opposition New Politics Alliance for Democracy (NPAD) has 130 members. Only 130 lawmakers voted on Monday, and Chung declared the vote failed. The Saenuri Party supported the bill when it was first passed in May as part of a political deal with the NPAD, earning its support of a separate bill reforming the civil service pension system. 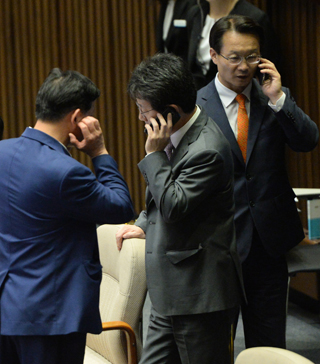 Rep. Yoo Seong-min, center, calls other Saenuri lawmakers to come back to the main chamber to prepare for voting on economic bills. [NEWSIS]

Unless a new vote is arranged for the bill, it will remain pending in the legislature and be automatically thrown out at the end of next May when the 19th National Assembly ends its term.

The Saenuri Party’s boycott of the vote was its first step to mend the rupture with the president. When President Park sent back the bill to the legislature for reconsideration on June 25, she declared war on lawmakers - even from her own party - for their cynical political bargains. She also demanded that the ruling party’s floor leader, Rep. Yoo Seong-min, resign for having agreed with the opposition party on the political deal.

After the president’s surprisingly harsh criticism, the ruling party quickly vowed it wouldn’t vote to override her veto. Yoo apologized to the president and promised to improve ties with the Blue House, but refused to step down.

The Blue House wasted no time to celebrate the outcome. “The National Assembly’s decision today once again reaffirms the value of the Constitution,” Min Kyung-wook, presidential spokesman, said.

Earlier in the day, the main opposition NPAD urged the Saenuri lawmakers to participate in the vote, but it had little effect.

“If they walk away, today will be remembered as the day of betraying the people,” NPAD Chairman Moon Jae-in said during the party leadership meeting in the morning. He added that legislators must follow their consciences, not the president’s orders.

In another meeting with NPAD lawmakers, Moon went further and likened Park to an “angry queen from a dynastic era who reigns over servants.”

Referring to her angry scolding during a June 25 cabinet meeting, Moon said, “What Park said was not the language of the president of a democratic republic to the legislature.

Moon said it was even more surprising that the ruling party decided to grovel on its knees and beg her forgiveness, criticizing the Saenuri lawmakers’ decision to not participate in the vote.

Saenuri Chairman Kim Moo-sung held a press conference and apologized to the public for the party’s flip-flopping. He said the ruling party had no choice but to accept the president’s veto, and promised to be more prudent in future legislative activities.

But embattled floor leader Yoo stayed on as the party’s chief negotiator despite demands by Park loyalists that he step down by Monday. Asked if he had any announcement about his fate after Monday’s vote, Yoo said, “Not today.”

He had two one-on-one meetings earlier in the morning with two powerful members of the party, presumably to discuss his fate. Yoo was elected in February based on the pledge that he would redefine the party’s way of doing business with the Blue House.

Yoo was once a Park confidant, serving as her chief of staff when she was the chairwoman of the conservative ruling party.

But he became estranged from her in 2011, about a year before the 2012 presidential election, for having different opinions about party affairs.

Shortly after the leadership meeting, Yoo and Rep. Suh Chung-won, nicknamed the “eldest brother of the Park loyalists,” met for 15 minutes. They both remained tight-lipped about the discussion.

Later in the morning, Saenuri Chairman Kim and Yoo sat down for talks for about 30 minutes in Yoo’s office. They also refused to say what they had discussed.

Kim had once faced a similar situation when the party, controlled by Park loyalists at the time, did not offer him a nomination in the April 2012 general election.

While Kim’s allies pushed him to abandon the party and create his own party with other politicians disgruntled with the Park loyalists, Kim held a press conference and vowed to not run for the sake of the party’s future. His decision calmed other politicians who were thinking about leaving the party.

Speculation ran high that Kim was trying to persuade Yoo to step down from the floor leader post for now for the sake of a better political future.

A Park loyalist, Rep. Kim Tae-heum, issued a new ultimatum on Monday. “If Yoo doesn’t step down by tomorrow morning, I can ask for a general assembly of lawmakers [to decide his fate],” Kim said on Monday.

Meanwhile, the ruling party’s boycott of the voting created a new deadlock in the legislature as the opposition NPAD decided to walk away from the scheduled voting on 61 other bills, many concerning the economy.

After the failed vote to override the presidential veto, the NPAD held a meeting of its lawmakers and decided to boycott further voting.

After the NPAD refused to come back to the main chamber to vote on the economic bills, the Saenuri Party asked National Assembly Speaker Chung to restart the voting session so that it could use its majority to ram through the pending bills.

Park Dae-chul, spokesman of the Saenuri Party, said the voting session would restart at 9 p.m., even if the opposition lawmakers didn’t attend.

A source from the National Assembly speaker’s office also confirmed that the voting would be arranged later at night.