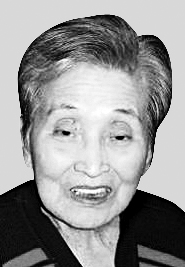 Choi Geum-seon, a Korean woman forced to work in a Japanese military brothel during World War II, died late Sunday night at the age of 90.

The Korean Council for the Women Drafted for Military Sexual Slavery by Japan, which is a civic group supporting the victims of sexual slavery also known as “comfort women,” announced that Choi died at around 11:20 p.m. in a local hospital in Gyeonggi. The cause of death was sepsis and pneumonia.

She was hospitalized in 2012 and had been receiving medical treatment since.

According to the JoongAng Ilbo, Choi was born in 1925 and picked up to work in the brothels at the age of 17 in 1941. She worked as a comfort woman in Harbin, China, until she ran away to Pyongyang in 1942 and met her husband there. After moving to Seoul, the couple got married.

With Choi’s death, the number of surviving comfort women falls to 48, down from the 238 women who were registered with the government as victims of sexual slavery. Seven comfort women have passed away this year alone.

The comfort women issue has been a key source of friction between Korea and Japan since the 1990s. The Japanese government has not issued a formal apology to the victims.

In Korea, a rally called the Wednesday protest, which demands a formal apology, is held every Wednesday in front of the Japanese Embassy in Seoul. The weekly rally has been going on since 1992.

A rally was held in front of the Japanese Embassy in Washington last week for the first time.

Kim Bok-dong, 89, a former comfort woman, participated in the protest in Washington, which was organized by Korean and Washington-based civic organizations.

“Before I die, the Abe administration needs to clearly settle what Japan has done in the past,” Kim said during the rally.

Meanwhile, Choi’s mourning altar is at a local hospital in Yeongdeungpo District, Seoul.