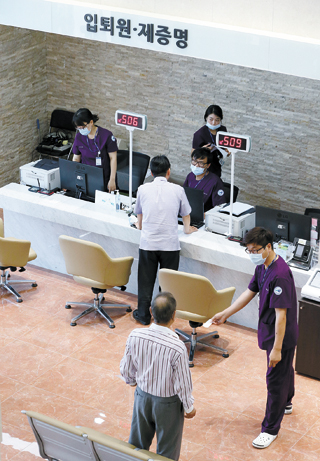 The current system, in which health and welfare authorities are combined in a single ministry, is what led to the country’s lack of professionalism in health and medical treatment, the press release read.

In a press conference held the same day at the National Assembly, Choo Moo-jin, head of the KMA, stressed that only seven out of the 34 OECD member countries run a system similar to Korea’s.

Data released earlier showed that the ministry funneled most of its budget to the welfare sector this year. Of its 53.4 trillion won ($47.5 billion) annual budget, only four percent was allocated to health and medical treatment.

The associations also requested financial assistance for medical facilities hit hardest by MERS, and suggested the establishment of a consultative group involving the government and private sector to study ways to effectively respond to future infectious diseases.

Meanwhile, no additional case of MERS was reported on Monday, leaving the total number of confirmed cases at 186. The last patient, who came to light on Sunday, was a 50-year-old woman whose husband had contracted the disease and was recently released from the hospital.

The death toll also remained unchanged at 33 for the sixth consecutive day.

So far, 117 people have successfully recovered and left the hospital, while the fatality rate in Korea stands at 17.8 percent.

Of the 36 currently hospitalized, 12 are in critical condition.

With the outbreak finally waning, medical facilities across the country are responding by reopening their doors. After 38 days shut down, Pyeongtaek St. Mary’s Hospital in Gyeonggi, ground zero for Korea’s MERS outbreak, resumed accepting outpatients on Monday morning.

Only 150 people dropped by the first day, 50 percent fewer than usual. Of the 186 MERS cases in Korea, 37 traced back to that hospital, located 40 miles from the capital.

“I send my deepest apologies to those who had to cope with the inconvenience of quarantine, and my condolences for the patients who died and their surviving families,” said Lee Gi-byeong, head of the hospital.

The hospital vowed to become the safest in the region, in part by taking preventative measures against MERS, including downsizing the number of patients in each room.