Piranhas on the loose in a reservoir

Piranhas on the loose in a reservoir 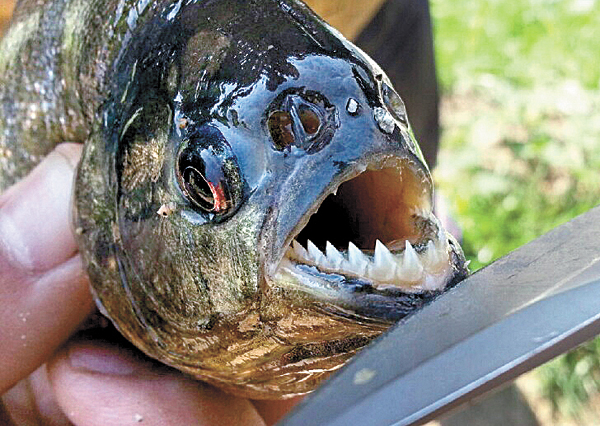 A piranha caught in a reservoir in Gangwon Province. By Park Jin-ho

Piranhas, omnivorous tropical fish that live in the Amazon and Hollywood horror movies, have been found in a reservoir in Gangwon Province.

The National Institute of Ecology (NIE) and the Research Center for Fish at Kangwon National University revealed on Sunday that three piranhas 15 (5.9 inches) to 19 centimeters long and one 30-centimeter red belly pacu, a species similar to the piranha, were caught over the weekend.

According to the NIE, four different fish that appeared to be piranhas were also caught four different times, but managed to escape by cutting through fishing lines with their teeth.

This is the first time that either species have been found in this country’s waters. The NIE suspects the piranhas were raised and kept for ornamental purposes and then thrown away. Since they normally live in tropical climates, it seems unlikely they would survive the coming winter.

“Given the reservoir’s low water level thanks to this year’s drought, the likelihood that [the fish] could have swam into nearby streams is very low,” said Jaeseok Choi, director of the Research Center for Fish at Kangwon National University.

However, in case the fish have reproduced, the reservoir’s conduits into nearby rivers have been closed off. A wire net has been installed in drains.