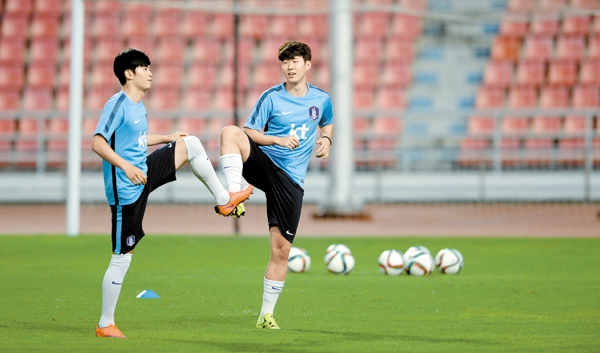 Kim and Son play for different teams in the German Bundesliga, and though they’ve gone head-to-head in Europe, they hope to become a legendary pair on the national squad like Park Ji-sung and Lee Young-pyo - with a caveat.

“[When we play for the same team], I think I’ll miss the joy I feel after I stop Son from scoring,” Kim said.

Kim, who plays with TSG 1899 Hoffenheim, has secured his position as left back after playing full time in all six matches during the Asian Cup this January.

Son, who is with Bayer Leverkusen, has already become the attacking ace of the national team.

In an interview with Korea JoongAng Daily affiliate Ilgan Sports on June 23, Kim said he wants to experience a semifinal run in the FIFA World Cup with Son, just like Park and Lee did in 2002. The former Albirex Niigata player talked about his friendship with Son and life in the German Bundesliga.

Q. Just how close are you and Son?

A. We call each other every day even if there’s no particular reason. I call Heung-min “son” and Heung-min calls me “darling.” We ask each other things like, “what did you eat” or “what do you want to eat,” and sometimes I tell him “you should try this food” (laughs). When I can’t contact him, I call him later and ask, “Why didn’t you answer my call?” After I do interviews, he always asks me, “Did you also mention me?” Wait, my answer really sounds like we are dating each other (laughs).

Did you guys meet often in Germany last season?

Actually, we didn’t meet in person. Son lives in Dusseldorf and I live in Heidelberg, which is about three to four hours away by car. Instead, I often met with Heung-min in Korea, along with [FC Seoul player] Yoon Il-rok.

You and Son remind fans of the “legendary partners” Park Ji-sung and Lee Young-pyo.

Since Son is an attacker and I’m a defender, we do want to be like Park Ji-sung and Lee Young-pyo. We began playing football after watching them make their historic semifinal run in the World Cup. So, I always think about us making it to the World Cup, too.

You faced Son in the German Bundesliga twice. How did that feel?

In our first meeting, I was hard on Son because he seemed to play a little loose. I tackled him on the ground and he kept telling the referee I’d fouled him. I just said to Son, “Stand up already.” (laughs). In the second meeting, Son was moving around all over the place not like in the past. I scratched his arm after I tried to block one of his shots. Son then said, “Why are you trying to kill me? Just let me score one.” But I wasn’t moved by his words and just did my job anyway.

You two seem to be really good friends.

I want to play with Son. But when that happens, I think I’ll miss the joy I get after I stop Son from scoring.

Is Son also a good rival?

It’s hard to say we are rivals, but we are good competitors. On the youth national team, I was the captain and a little ahead of him (laughs), but now Son has already experienced the World Cup and was selected for the senior national team before me. He played in Europe earlier and also in the UEFA Champions League. He is ahead of me, but since my friend has made it, I feel more motivated.

On the national team, other players born in 1992 are rising as core members, not just you and Son.

I really feel good that Lee Jae-sung of Jeonbuk Hyundai is doing well on the team. We trained together back on the youth team. I often say to fellow players that we should go to the World Cup together, but then Son breaks the mood by saying, “Can all players here actually go to the World Cup?” But it’s nice that I have many friends on the national team.

How far would you want to go in the World Cup?

You know, Son and I are the “2002 World Cup kids.” As he takes care of offense and I work on defense, we should go to the World Cup semifinal one more time.

How do you feel after finishing your first season in Germany?

I really learned a lot. German players’ mindset and attitude in training is totally different than that of Korea and Japan.

What was so different?

Japan’s J-League players are a little quiet on the ground. But in Germany, whether it’s practice or an actual match, players sometimes curse and show their temper. At first, it made me uncomfortable. But after training and in the locker room, they forget about the fight and have fun. I thought, “How can they be so cool like that?” But now I also curse at them because if I don’t, I’ll be the only one just receiving.

What do you most regret?

Injury, of course. I couldn’t spend much time with the club after I was tapped for the national team, but I was also frequently injured. In my debut match, I hurt my shoulder. In the Asian Game, I hurt my thigh. In the Asian Cup, I hurt my knee. I couldn’t blame others for the injuries, but I felt really down about it.

So what’s your impression about the German Bundesliga.

As I imagined, this is a place where big footballers play aggressively and with lots of physical contact. German players just have a different way of playing … but inside of the toughness, there’s considerate behavior. Even when they tackle, they pull their feet when it’s going to hurt the opponent. It’s very delicate. In addition, the game tempo is just too fast. When I tried to take a little rest after defending, I had to participate in an attack right away. Physical contact and big height can be countered with a competitive spirit, but I had a difficult time adjusting to the speed of the game.

Which attacker was the hardest to defend against?

Unfortunately, I couldn’t play two matches against German champion Bayern Munich because I was injured. I really wanted to defend Arjen Robben and Franck Ribery. Among the footballers I played against, Borussia Dortmund’s Gabonese forward Pierre-Emerick Aubameyang was most difficult for me to defend. He is really fast. I’m confident with my running, but even with the ball, he’s too fast. If he moves to spaces without a ball, I just can’t catch him. Compared to Aubameyang, Son is slow (laughs). After I struggled against him, I looked up Aubameyang on the internet and found out that he is even faster than Usain Bolt in a 30-meter sprint. That information gave me some consolation (laughs). After that, I faced him twice more, but I think I defended him well.

Son speaks German very well. What do you think?

Because his football style and position is different, I don’t envy him much, but his German is one thing that I envy. My German teammates also praise his German. I wish Son to go Japan one day. Since he can’t speak Japanese, he should have difficult time there (laughs).

I’m staying with my parents. My mother takes care of food so I can eat what I’m eating in Korea. In away matches, I do eat what German teammates eat, but it’s still not to my taste. I’m adjusting to it.

Now that you’re a sophomore in the league, what’s your goal?

My goal for the upcoming season is not to be hurt. I want to play all matches and hope to play in the UEFA Champions League or Europa League.

What’s your goal in the national team?