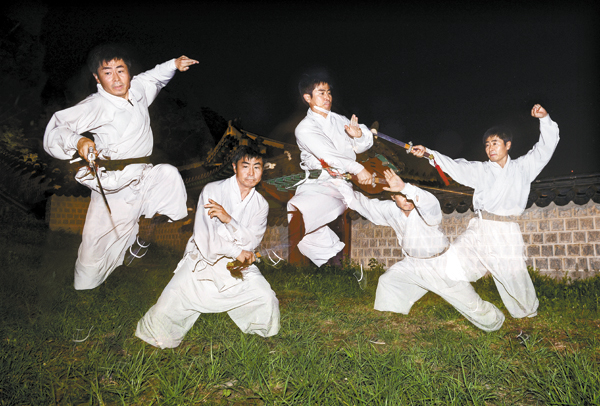 A time-lapse photo shows a member of the Society for the Preservation of Sippalgi demonstrating the historic martial art at Gyeonghui Palace in central Seoul.

In the front garden of the Temporary Palace at Namhansanseong, or Mount Namhan Fortress, in Gwangju, Gyeonggi, lances pierce the sky, the blades flashing as they cut through the air. 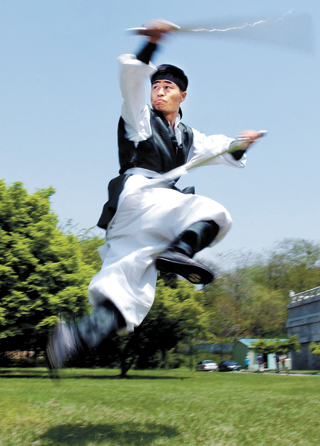 Park Gweon-mo, master of martial arts and vice chairman of the Society for the Preservation of Sippalgi, performs a move involving two swords.

Here on June 21, the descendants of Joseon Dynasty (1392-1910) warriors enacted a performance of the traditional martial art of Sippalgi. The performance was organized to give publicity to Joseon’s national sport and to instill a sense of pride among visitors to Namhansanseong.

In order to create an entertaining and pleasant atmosphere for the audience, the Sippalgi performance was modified in the form of a madanggeuk which is a traditional Korean performance that is staged outdoors.

Centering on Baek Dong-su, the most renowned martial arts master during the rule of King Jeongjo (1752-1800), the 22nd ruler of the Joseon Dynasty, the performance comically portrays Baek’s training in martial arts at a military camp and his journey to becoming Joseon’s best warrior.

Consisting of 18 fighting methods for general officers, Sippalgi was created over a span of 200 years, from the beginning of the Joseon Dynasty through the Japanese invasions of Korea (1592-1598), also known as the Imjin War, and the second Manchu invasion of Korea (1636-1637).

It has been passed down to the present in its complete form by means of the Muyedobotongji, a comprehensive manual of martial arts that scholars Park Jae-ga, Lee Duk-mu and Baek Dong-su wrote under the royal commission of King Jeongjo in his 14th year of rule (1790). 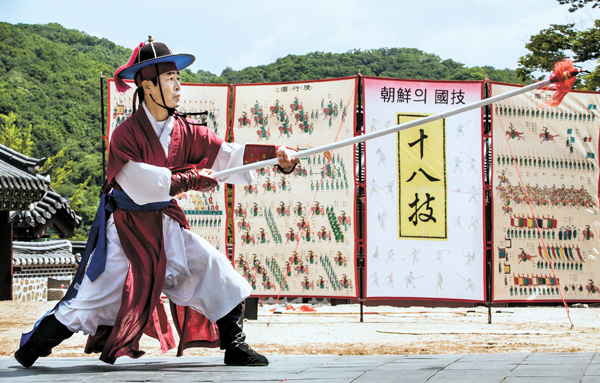 The members of the Society for the Preservation of Sippalgi perform at the Temporary Palace at Namhansanseong, or Mount Namhan Fortress, in Gwangju, Gyeonggi.

The martial arts from nations like China or Japan were formed around the individual or the family. However, Sippalgi is distinctive in that the Joseon Dynasty government analyzed 275 types of martial arts from around the world and created it to fit Joseon’s needs. Sippalgi also has exceptional historical value in that it was refined and altered as Joseon fought numerous wars.

After Joseon’s largest traditional military was dissolved during the Japanese colonial era, Sippalgi gradually lost its footing as the national martial art. It seemed to be revived in November 1945, when a Sippalgi performance took place at the first National Liberation Day Celebration at the end of Japanese rule. However, Sippalgi once again faced a crisis, due to the widespread influence from vestiges of Japanese imperialism like kendo and judo. 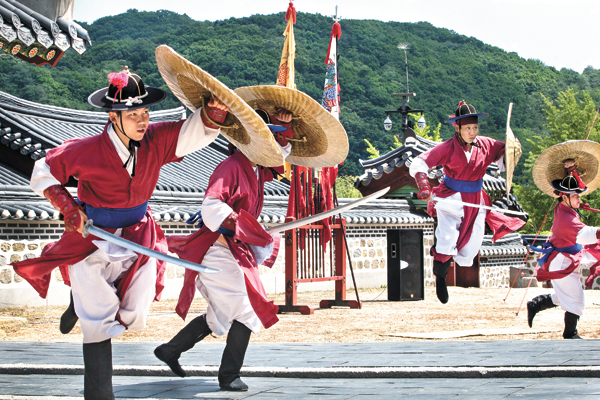 The members of the Society for the Preservation of Sippalgi perform at the Temporary Palace at Namhansanseong, or Mount Namhan Fortress, in Gwangju, Gyeonggi.

Fortunately, Sippalgi was reborn with the help of Kim Gwang-seok, a doyen of martial arts. In 1987, Kim created a practical manual of Muyedobotongji with folklorist Shim Wu-seong, hence building the foundation for Sippalgi’s rebirth in the present time. The manual began to be officially disseminated as many universities across the nation, including Seoul National University, began establishing Sippalgi societies.

The Society for the Preservation of Sippalgi, led by President Shin Seong-dae, actively works to publicize the national martial art. Its members, consisting of cultural personages and professors, are mostly the disciples of Kim Gwang-seok. The group asserts that Sippalgi should be designated as an intangible cultural asset and also managed and developed on a national level.

In order to promote and develop Sippalgi, these members promote it not only through scholarly research, but also through various cultural festivals and performances.

Having entered the field of Sippalgi in 1987 due to his love for action involving spears and swords, Master Park has so far produced 390 performances with junior members. He has staged his performances at venues such as the National Folk Museum of Korea, Gyeongbok Palace and Namsangol Hanok Village in Seoul, as well as at Namhansanseong.

Master Park knows that the meaning and value of Sippalgi are too great to simply categorize it as a sport. Thus, he has given up his private life to devote all his passion to publicizing Sippalgi. He stated that he finds great value and significance in stirring up national pride by promulgating the history of Joseon’s military prowess and unique form of martial art.

Sippalgi was carefully passed down through our nation’s tumultuous history thanks to the devotion and efforts of many. Historically and culturally valuable and full of Joseon Dynasty spirit, Sippalgi is a unique martial art that is unlike any other.