More than 70 percent of Korean employees support a “peak wage system,” a new wage guideline to start cutting salaries of senior workers several years before retirement, according to results of a poll released yesterday.

The poll by the Korea Labor and Employment Relations Association surveyed 1,000 adult employees at companies with more than 99 workers. Nearly 73 percent said it was “necessary” to adopt the system before extending the retirement age to 60 next year.

That extension of the retirement age will apply to both the public and private sector nationwide.

When asked why, 56.3 percent of the supporters said the system would “stabilize employment” by guaranteeing a job until retirement age in return for a smaller paycheck. 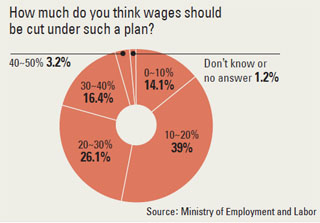 That question allowed multiple responses, and almost 38 percent of the plan’s supporters said they believed it would help create more jobs for young people. Thirty-five percent said the system would ease the burden on companies that are being forced to extend the retirement ages.

Just over a quarter of respondents opposed the idea. In that group, more than 44 percent said employers should look for ways other than cutting labor costs to raise competitiveness.

If the system is adopted, the maximum cut in salary that respondents said they could accept was 16.5 percent on average. Forty-three percent of the respondents said 55 was the most suitable age to start trimming paychecks.

Nearly 56 percent of the workers polled said the government should offer financial support to companies to make the new system work correctly.

The government has already started requiring state-run companies to gradually trim wages for senior employees several years before their retirement, generally starting at about age 55. All 316 government-run organizations and companies will be subject to that rule in 2016.

In the private sector, unions are unhappy and vocal. They say they don’t believe the retirement age will be extended at all companies in the country, particularly at small enterprises and charge that the new system is a ruse to save corporate money at the expense of workers.

“Specialists in the labor market should study the peak wage system and develop models for the system reflecting the differing conditions in different industries,” said Cho Joon-mo, president of the labor association that conducted the survey.