Samsung warns of a weak Q2

Samsung warns of a weak Q2 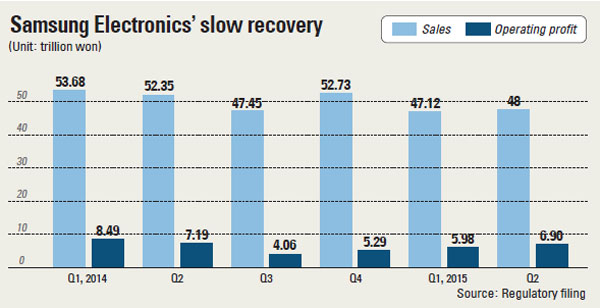 Samsung Electronics will likely undershoot most analysts’ forecasts for the second quarter as sales of the much-anticipated Galaxy S6 smartphone series were not strong enough to drive significant revenue growth.

In a preliminary estimate on Tuesday, the tech giant predicted it made around 6.9 trillion won ($6.13 billion) in operating profit between April and June, 4.03 percent down from the same period last year.

The figure fell below the market consensus of 7.26 trillion won, a rare case of Samsung Electronics missing the 7 trillion won profit level during a quarter in which it released a premium model smartphone.

Samsung’s Galaxy S6 and S6 Edge were released in April to positive critical reviews and hopes for super sales.

Still, the estimate represents an improvement from the past three quarters, putting Samsung on a path to recovery from sluggish growth.

The company projected revenues of 48 trillion won, declining by 8.31 percent year-on-year. The estimate, again, missed analyst forecasts of 52.93 trillion won, according to market tracker FnGuide, which announced a market consensus of 23 brokerages.

At the beginning of the year, positive prospects were prevalent for Samsung’s second quarter profit with most estimates coming between 7 and 8 trillion won.

Although Samsung didn’t break down the numbers, analysts previously said that somewhat disappointing sales of the Galaxy S6 series could drag on Samsung’s second quarter.

“The Galaxy S6 failed to serve as momentum for the company,” said Greg Roh, an analyst at HMC Investment & Securities, “as it sold less than expected. And demand for other consumer electronics products was also not that great.”

Market research firms recently predicted that sales by Samsung Electronics would come in between 45 million and 50 million won, lower than earlier estimates of anywhere from 50 million to 70 million won.

“In emerging markets such as Indonesia and India, local manufacturers dominate the low-end market,” Roh said. “As for the premium market segment, Apple’s new iPhone, which was released earlier than the Galaxy S6, damaged Samsung’s revenues.”

“But the market response also indicates that premium smartphone consumers now have higher standards and expectations, something that couldn’t be fulfilled by curved screens.”

In the meantime, the average selling price of smartphones continues to slide, which works against premium smartphone makers like Samsung.

Samsung accounted for 24 percent of the world’s smartphone market in the first quarter, down from 31 percent a year earlier, according to Strategy Analytics.

But analysts said a further slide could be contained by a better performance by the company’s memory chip division.

Strong demand for NAND flash memory chips has bolstered the earnings of the semiconductor division.