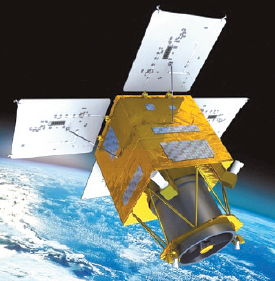 Korea Aerospace Industries was selected on Tuesday as the preferred bidder for the government’s project to develop satellites to monitor terrestrial conditions.

The designation means that KAI, if its performance in the first phase of the project is satisfactory, will probably be selected to provide the satellites and infrastructure for the project in its entirety.

With 842.6 billion won ($743 million) allotted to it, the government project will be conducted in three phases through 2025 to build 12 satellites and send them into orbit.

In the first phase, Korea Aerospace will be responsible for building, by 2020, a launch vehicle capable of putting several different types of satellites into orbit and the first two satellites themselves.

“The platform will be compatible with different payloads - whether an optical bench or a space payload,” a KAI official said yesterday. “By using such a platform, we can save time and money.”

The government will allocate 224 billion won for the first phase of the project, a KAI statement said.

Data from the satellites, described as “midsize” among current earth satellites, will be shared among agencies of the science, land and environment ministries and the Korea Meteorological Administration.

The satellites being developed will have cameras with a resolution of half a meter (1.5 feet), which will make them useful for many applications in forestry, agriculture, environmental remote sensing and research, KAI said.

The aerospace firm hopes its participation in the project will lead to a wider range of businesses and generate more sales.

“KAI aims to enter the mid-and-large satellite business both at home and abroad,” the state-funded supplier said in a statement. “Within 10 years, KAI can generate 350 billion won in sales.”

KAI also said it would hire more employees in its aerospace business, increasing its workforce to 320 from the current 100. It did not specify how soon that would happen.

“To be competitive in the global aerospace market, there are high barriers,” said Ha Sung-yong, KAI’s head. “We are working on a business strategy that bundles offerings of payloads and satellites for exports.”

The Park Geun-hye administration has shown great interest in several space projects. The government has devised a plan to launch an exploratory lunar probe aboard a Korean-made launch vehicle by June 2020 and another to conduct missions to Mars and to asteroids by 2040.