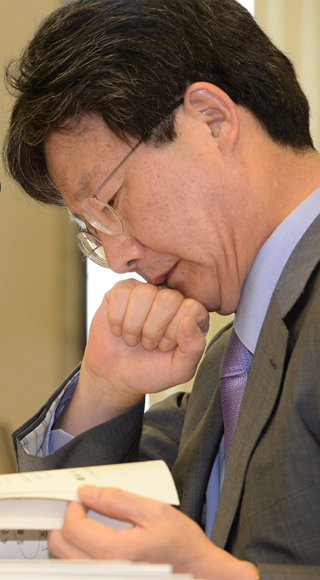 The fate of the ruling party’s embattled floor leader is scheduled to be decided this morning in a showdown between his supporters and loyalists of the president.

“I have asked for a general assembly of lawmakers for 9 a.m. tomorrow,” Rep. Kim Moo-sung, the chairman of the Saenuri Party, said on Tuesday. “And floor leader Yoo Seong-min agreed to it.

“This meeting is about adopting a resolution to recommend Rep. Yoo’s resignation from the floor leader post for the sake of the Saenuri Party’s future and the success of the Park Geun-hye administration,” Kim said. “We will decide Yoo’s fate.”

Rep. Yoo, a three-term lawmaker elected in February as the floor leader of the Saenuri Party, has been under snowballing pressure from President Park and her loyalists to step down over a political deal he made with the main opposition party to pass a reform plan for the pension system for civil servants. In return for its support on pension reform, the ruling party helped pass a controversial bill that the president ended up vetoing at the end of last month.

Enraged, the president has demanded Yoo quit, though the 57-year-old legislator has refused to do so.

Kim said the resolution would be drafted and presented before the party’s 160 lawmakers to seek their approval. The party’s Supreme Council decided on the format earlier in the morning and Yoo accepted it, the chairman added.

But the Saenuri wants to avoid voting on the resolution, hoping to pass it by consensus instead. “We decided to put all possible efforts toward avoiding a vote,” he said. “That’s why we named it as the general assembly of lawmakers to adopt a resolution.”

Kim said unanimous support is not needed for the resolution to be considered passed, and there are a number of lawmakers who support Yoo.

Yoo said Tuesday that he won’t attend today’s meeting of lawmakers. “I have no intention to intervene in the process,” he said. “No matter what decision is made, I will follow it.”

The resolution, ironically, will be drafted by Chairman Kim and Rep. Won Yoo-chul, the chief policymaker who won his post as Yoo’s running mate in February. Won has been trying to dissuade the members of the Supreme Council from forcing the floor leader to step down.

After the Supreme Council meeting on Tuesday, Won told reporters that holding a vote of confidence at the assembly of lawmakers today is unacceptable. “That is just too brutal and can never happen,” he said. “The general assembly must not be a showdown of votes.”

“If Yoo loses pitilessly, it will be unbearable,” Won said. “He has worked very hard and he is a precious asset to the party, so we must find a proper exit for him. We can’t just cut him.”

Won added that Yoo is partly responsible for the poor communication with the Blue House, to which he should have paid more attention. Won also said Yoo should decide on when to step down.

Because the floor leader and the chief policymaker are elected as running mates, Won should resign his seat if Yoo gives up his own.

In an attempt to mend ruptured ties with the president, the Saenuri Party is trying to ease Yoo out as gently as it can.

Public opinion appears to be favorable toward Yoo, however. A survey showed that the public increasingly opposes Yoo’s resignation as he feels pressure from the Blue House.

According to a second Real Meter opinion poll about Yoo’s fate, 49.4 percent of respondents opposed Yoo’s resignation, while 35.7 percent said Yoo should step down.

In an earlier poll conducted on June 29, shortly after Park vetoed the bill, 45.8 percent said they disagree with Yoo’s resignation, while 31.5 percent said Yoo should step down.

Yoo’s persistence has created a split in the ruling party. Ahead of today’s meeting, Park loyalists started aligning supporters to force Yoo out.

A group of lawmakers from the Chungcheong region who are allies of the president held a meeting and urged Yoo to step down. About 10 lawmakers including Reps. Rhee In-je, Chung Woo-taek and Hong Moon-pyo attended the meeting.

The lawmakers held a meeting in the afternoon and decided to boycott today’s general assembly if its outcome was predestined.

The legitimacy of the Saenuri leadership’s plan to hold a general assembly of lawmakers to adopt a resolution to recommend Yoo step down was also questioned. Article 77 of the party’s constitution says a lawmakers’ assembly has the right to elect the floor leader, decide strategy inside the National Assembly and expel a member, but there is no stipulation regarding the resignation of a floor leader.

President Park on Tuesday remained silent about the developments in the ruling party, but issued another warning, this time aimed at her ministers. “Ministers must lead their ministries on behalf of the people. There should be no self-serving path,” she said. “You must sacrifice and serve the people and do your best for the country’s economy and the people’s lives.”

While Park has made similar comments in the past asking the Cabinet to concentrate on the economy, Tuesday’s remark was conspicuous for its warning about self-serving politics. When Park censured the ruling party on June 25 and demanded Yoo’s resignation, she similarly criticized politicians who did not serve the people, instead looking after their own gains.

Speculation grew Tuesday that the president’s remark was a warning to the politicians turned ministers who are expected to run in next year’s general election.

Park has recruited several lawmakers to work in her cabinet.