Kim Hyung-wook testifies before the Subcommittee on International Organizations under the U.S. House of Representatives in June 1977. It was his first public appearance since seeking asylum in 1973. [JoongAng Photo]

After years of exploiting his power as the chief of the Korean Central Intelligence Agency (KCIA), Kim Hyung-wook was dismissed from his post in October 1969.

President Park Chung Hee became aware of the danger posed by his one-time loyalist after accusations against Kim began to snowball.

Nevertheless, he made way for Kim to serve as a lawmaker in the eighth National Assembly, but it was a proposal that fell far short of satisfying the former military academy cadet. In April 1974, Kim fled to the United States.

He claimed that he had no choice but to seek asylum, having been persecuted by the Park regime - which I believe was a flat lie. Capitalizing on his power at the spy agency, Kim siphoned off tremendous amounts of money, adding up to as much as tens of millions of dollars, I think. 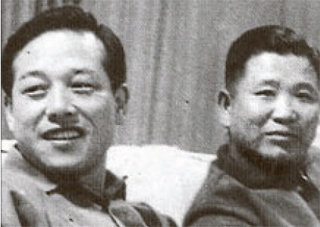 Kim Jong-pil, left, and Kim Hyung-wook are pictured together in 1961 following the military coup. [JoongAng Photo]

Korean intelligence agents were also mobilized to help him hide illicit funds in Hong Kong, which then made their way to a secret account in Switzerland.

Kim purchased an upscale house in New Jersey in an affluent neighborhood, and everything would have been fine if he had led a quiet life and simply enjoyed the fortune he had amassed.

But he didn’t live such a life. Instead, he behaved as though he knew information that would compromise Park and his administration.

I later heard from a senior agent at the Central Intelligence Agency (CIA) during a visit to Washington that Kim had been caught by CIA agents upon his arrival from Switzerland at John F. Kennedy International Airport in New York. They had reportedly been tipped off that Kim had strapped cash from his Swiss account to his legs in order to smuggle it into the United States.

During his interrogation at the airport, the agents told Kim that they would let him off the hook with the money if he cooperated by telling them everything he knew about Park, which he did. But the CIA already knew the information he provided them. They returned his money to him, having decided he wasn’t worth much as an informant.

But the agency continued to monitor him and later discovered that he was trying to extort money from Korean businessmen in the United States.

I was becoming concerned about Kim’s reckless behavior in the United States so I decided to persuade him to return to Korea. I visited California on April 5, 1977, as I wrapped up an 11-nation trip to South America as presidential envoy.

I telephoned Kim and told him to fly from New Jersey for a talk.

“Why should I go there?” he asked.

As we got together at Pebble Beach [in Monterey], and I told him, “You and I have both sinned against the nation for our roles in the May 16 Revolution [military coup]. If 30 million Koreans revolt against the Park government and call for a regime change due to poverty, the heaviest burden falls on us for what we did back in 1961. For that reason, we cannot leave the country. You must come back.”

“Come to your senses!” I pleaded. “You once vowed your life to serve Park Chung Hee. If you renounce that, you can’t just move around the U.S. spreading rumors about him. Why don’t you come back to Seoul? If you ask Park for forgiveness, he will forgive you.”

Then I recommended he take the job as Korean ambassador to Brazil.

He didn’t like the idea at first and thought I was merely trying to exile him to a far-off country. He wanted a diplomatic post in Europe,.

I said: “You don’t even speak English. Brazil is a fine country to live in. Life there is simple and comfortable.”

He seemed inclined to take my offer, and I urged him to be rational and seriously consider it. Then we played golf, which only enforced my assumption that he would take the job and reconcile with President Park.

But a few days later, Kim called me and declined, directing his anger at me.

“You almost tricked me. You’re trying to push me out of the circle and force me to spend the rest of my life in the [developing world]! You think I’m so dumb as to have listened to you?”

He clearly wasn’t thinking straight with a rational mind-set. There wasn’t anything I could say.

“You go your own way from now on,” I said. “If you change your mind, just let me know first.”

It was my last conversation with him. Two months later, he publicly blasted President Park while testifying at a hearing arranged by the Subcommittee on International Organizations under the U.S. House of Representatives and accused him of amassing illicit political funds and abusing human rights.

Then in October 1979, Kim vanished following a trip to France and Geneva.

No one has heard from him since.