Eco-trail to open along inter-Korean border

Eco-trail to open along inter-Korean border

Preparations for the eco-trail near the Imjin River in Paju, northern Gyeonggi, are nearly complete. The trail is currently scheduled to open at the end of August. By Oh Jong-taek

An eco-trail inside the Civilian Control Line near the border between the two Koreas will soon be open year-round to the public for the first time in 44 years.

The 8.9 kilometer-long (5.5 mile) loop, located in Paju, Gyeonggi, circumvents a patrolled area previously off-limits to the public due to its proximity to North Korea and follows a patrolled, chain-link fence along the Imjin River.

The governments of Paju and Gyeonggi spent a total of 2.3 billion won ($2 million) to expand and improve the original, closed-off trail for use by civilians. Observatory platforms, rest shelters, restrooms and guardrails have also been installed for added convenience.

Given the area’s sensitive location in regard to security, 14 additional CCTV cameras will be installed along the trail, which is scheduled to officially open at the end of August. 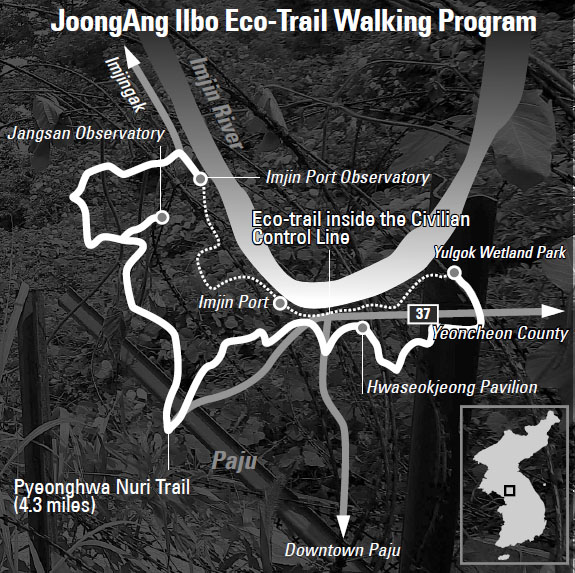 Hours of operation are presently planned for weekends and one day during the week yet to be determined.

Parts of the eco-trail have been open to the public in recent years.

This is the first time the trail will be accessible year-round since the area’s inclusion in 1971 in the Civilian Control Line, which barred civilians from entering.

The restriction, however, has allowed for the natural area to be preserved and allowed it to grow. Deer run freely in the area just off the eco-trail.

While trekking, hikers can see Chopyeong Island, about 2 kilometers downstream from Imjin Port. The island is overgrown with reeds and willows, and attracts cranes, ducks, geese, eagles and other migratory birds in the fall.

The trail also offers a view of a magnificent cliff 10 meters high and 400 meters wide, with black columns like those of Jusangjeolli Cliff on Jeju Island.

Historical and cultural remnants can also be found in the area. During the Japanese Invasion of Korea in the 16th century, Koreans sought refuge at Uijuro through Imjin Port, located halfway through the eco-trail next to the river.

And just a kilometer east of Imjin Port is the pavilion where Yulgok Yi I, one of the most prominent Korean Confucian scholars in the Joseon Dynasty, once studied.

But the main attraction of the eco-trail is the trail itself, which offers a rare opportunity to explore one of the most heavily fortified borders in the world.

The JoongAng Ilbo is currently offering its readers with an exclusive opportunity to walk the full eco-trail on July 18. Readers between 13 and 70 years old may register online for free (cafe.daum.net//ggtrail).

The first 300 applicants will be selected. Proof of subscription to the JoongAng Ilbo is required.