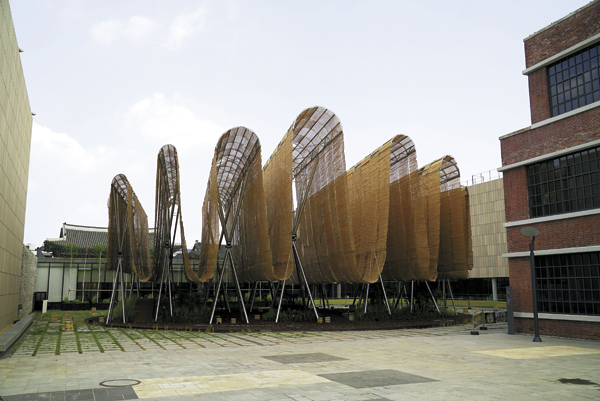 “Roof Sentiment,” a winning installation for the second Korean edition of the Young Architects Program by MoMA, invites visitors to take a break and enjoy the atmosphere with all five senses. It is located in the courtyard of the MMCA Seoul in Jongno District and will be open to the public until Sept. 30. Provided by the organizer

It’s summer time and it’s not unusual to spot reed blinds covering the windows of many homes in Korea. But when an unusually large reed blind is stretched across the madang, or courtyard, of the National Museum of Modern and Contemporary Art (MMCA) in central Seoul, it’s sure to catch the attention of passersby.

Since July 1, this huge installation in MMCA’s madang has been compelling visitors, as well as those who are just walking by, to go sit under it and catch their breath, take a short nap or just enjoy the fresh atmosphere with all five senses. The installation will be open to public until Sept. 30.

That’s the exact picture the two architects, Lee Chi-hoon and Kang Ye-rin of architectural firm Society of Architecture, had in mind when they were designing “Roof Sentiment,” the winning entry of this year’s Korean edition of the Museum of Modern Art (MoMA) in New York’s Young Architects Program.

Since last year, Hyundai Card and MMCA have been co-hosting the Korean edition of the annual competition, organized by MoMA since 1998, in an attempt to discover young architects and to provide a platform to share their work. The event first went global in 2010, expanding to Chile, Italy and Turkey. Noting the opportunities this program could give to young Korean architects, Hyundai Card, which has had a close partnership with MoMA since 2006, pushed to launch a Korean edition as well. 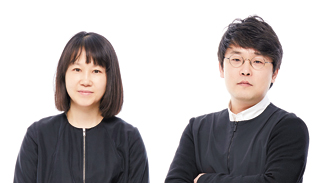 “When we were first given the theme for this competition, which was three words - shade, relax and water - we thought about a roof,” Lee said, explaining how roofs played a significant role in traditional Korean architecture. “Traditional architecture, like hanok for example, had all these elements. We could even see raindrops falling from the eaves of the roof.”

Emphasizing how the pavilion is installed in the museum madang next to Gyeongbok Palace and Bukchon, where roofs are a significant visual feature, the architects said they want the visitors to stop and enjoy the traditional atmosphere and also “recall the significance of this architectural element.”

“Roof Sentiment” is a large, flexible reed blind that approximately 10 meters tall (33 feet). It has a serpentine shape and is held up by tall pillars at the highest points, allowing several sections to hang down freely. Underneath the roof, there are grass mounds and reed chairs so that visitors can lie or sit down. Lee and Kang decided to make circular cutouts in several places in the blind to allow people to glimpse the sky, the mountains and the palace that surrounds the installation.

“When it’s sunny, people can not only find shade under this pavilion, but also experience different perspectives of the sunlight penetrating through the reed bind depending on where they are sitting,” said Lee.

“Moreover, the breeze makes the reed blind sway, bringing cool air while making natural sounds. When it rains, the smell of the natural reeds is enhanced and the reed blind also collects some of the rain drops while allowing some to penetrate through, allowing people to have a new experience as well.”

Martino Stierli, MoMA’s Philip Johnson chief curator of architecture and design, describes it as “an experience that speaks to all of the senses.”

“It is visually appealing but it also invites us to listen, to smell and to touch,” said Stierli, who visited Seoul for the opening of the exhibition on June 30.

“The elements of the design seem effortless, and yet offer maximum immersion into the sentiment expressed. This beautiful project has the power to connect each of us to both the distinct local context in which it was conceived, and also to a universally shared experience of summer and nature.”

Pippo Ciorra, senior curator of the National Museum of the 21st Century Arts in Rome, who has been one of the overseas jurors for the Korean contest since last year, also visited Seoul for the opening. Although he voted for the “Roof Sentiment,” it was the first time he saw the actual installation.

“I think it’s very pleasant,” he said, touching the blind above his head.

Many Koreans will find the reed blind familiar and traditional, but Ciorra said it’s also very common in Mediterranean countries.

“I also found it quite natural and familiar. So it’s a good solution. The way they expanded something that’s used in a very smaller scale to this monumental scale is very interesting”