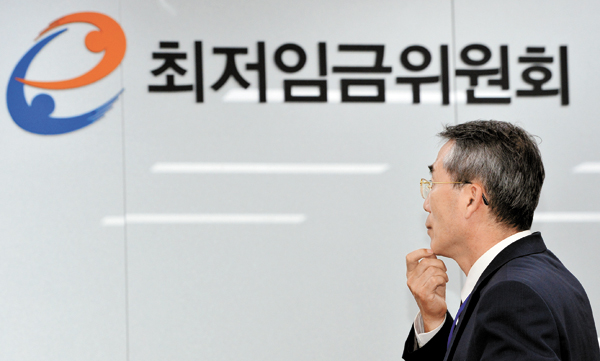 Park Jun-sung, Chairman of the Minimum Wage Council, at the council’s meeting room located within the government complex in Sejong city on Wednesday as negotiations with labor representatives over the minimum wage failed to produce an agreement. [NEWSIS]

Unions and management are struggling to find common ground on how much to raise the country’s minimum wage. The gulf between them remained wide yesterday.

The two parties concluded a marathon meeting early yesterday morning and were tentatively scheduled to resume talks in the evening. Union representatives threatened to boycott that session.

At the 11th round of negotiations, which ended yesterday morning, union representatives proposed a minimum wage of 8,100 won ($7.14) and employers’ representatives called for a wage starting at 5,715 won. Neither side budged during the meeting.

A third group at the meeting, called “delegates in the public interest,” is an arbitrators’ group of professors, labor specialists and government officials. They recommended a settlement on a wage of 5,940 to 6,120 won, a 6.5 to 9.7-percent hike in the current minimum wage of 5,580 won. The proposal from the arbitrators was poorly received by the union representatives, who walked out temporarily in the middle of the conference.

“The proposal from the delegates for the public interest has content that frustrates the 5 million workers paid the minimum wage now,” said a statement issued by the unions after the talks ended on Wednesday.

“In particular,” the statement continued, “the maximum recommended increase of only 9.7 percent means a worker would be paid less than 50,000 won for working hard for eight hours a day. Starting this year, Finance Minister Choi Kyung-hwan has raised expectations for an increase in the minimum wage to boost domestic consumption and economic growth based on increased incomes, and now we feel like we are being betrayed. To guarantee the basic quality of life, we are calling for 10,000 won as the minimum wage.”

It was not clear whether that demand was rhetorical or if the union has taken its earlier, lower proposal off the table.

The latest statistics from the Organization for Economic Co-operation and Development show that Korea’s minimum wage, the equivalent of $11,133 a year, ranked 15th among OECD member countries in 2013, based on the exchange rates to the U.S. dollar at the time.

The unions started the negotiations with a demand for a minimum wage of 8,400 won and reduced the figure to 8,200 won and then 8,100 won.

The employers, whose base position is a freeze in the current minimum wage, later offered 5,610 won and then 5,645 won before reaching their current 5,715 won offer.

Employers complain that a minimum wage hike would ripple through their pay structure, resulting in higher base pay and bonuses for many other workers.

“On March 30, the Employment and Labor Minister requested talks for the conclusion of minimum wage talks, which were to have been concluded within 90 days. That was June 29,” said an official at the Minimum Wage Council by phone. The council is a government organization in charge of the negotiations.“The parties were supposed to reach a conclusion this morning, but they failed,” the official said. “Even if the unions come to the talks this evening, they might stay up all night again.”

If unions refused to attend the talks, there was a possibility for employers to unilaterally decide on the minimum wage by a vote within their group.

Under the Minimum Wage Act, at least a third of representatives from both unions and employers should participate in a vote to decide a minimum wage increase, but if one party refuses to attend negotiations, that requirement is waived.