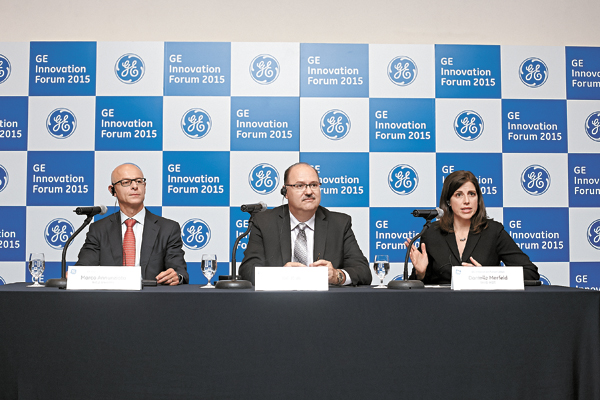 GE Korea has suggested a series of strategies that could help Korea as it struggles with an aging society and tough economic competition with rival nations, including China.

In a press conference at the COEX InterContinental Hotel in Samseong-dong, southern Seoul, GE’s Chief Economist Marco Annunziata, Vice President of the GE Global Software Center Bill Ruh and Global Technology Director of the GE Global Research Center Danielle Merfeld presented a report, “The Future of Work,” about a future driven by innovation in advanced manufacturing and digital technology.

GE said Korean industries are facing three big challenges: competition with newly industrialized nations, low productivity in services and an aging society. It said the country’s overall education level is relatively higher than rival nations, but the country is having a tough time nurturing competitive people with good capabilities to work in professional business fields. It also noted that the nation’s economy is too dependent on conglomerates and hasn’t built a business environment in which small businesses and startups can coexist with the chaebol.

The report said Korea spends about 4 percent of its gross domestic product on research and development, one of the highest ratios in the world, but the investment hasn’t yielded much due to poor industrial productivity.

GE suggested three strategies to resolve problems and provide new economic growth engines for Korea. The first is the Internet of Things, which GE calls the “Industrial Internet,” which integrates big data analytics with industrial machinery to improve the operating efficiency and productivity on production lines.

GE said Korea imported about $170 billion worth of energy in 2013, and improving energy efficiency at industrial sites by 1 percent could save about $1.5 billion every year.

GE’s Wind PowerUp big data method, for instance, can improve the total output of electricity from a wind power plant. The company’s SeaStream solution can improve a ship’s operating efficiency by 20 percent because it optimizes sailing routes, which could be a huge benefit for marine operators, who lose millions when ships are idle.

Annunziata, GE’s Chief Economist and author of “The Future of Work” said, “Korea has robust infrastructure as well as advanced digital technology and excellent talent. If Korea embraces the innovation of ‘The Future of Work,’ it can be a game-changer.”