Saenuri gives a shove, Yoo agrees to step down

Saenuri gives a shove, Yoo agrees to step down 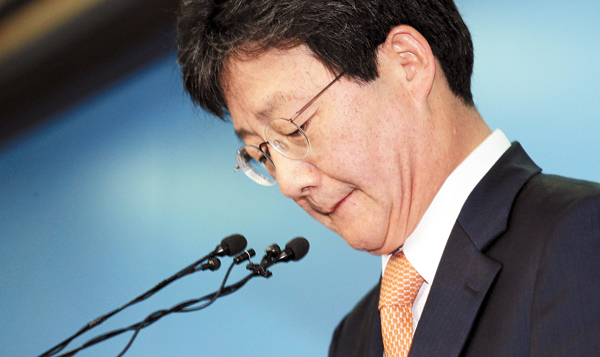 Rep. Yoo Seong-min announces his resignation as the Saenuri floor leader on Wednesday at the National Assembly. By Kim Sang-seon

The 13-day war between President Park Geun-hye and the floor leader of the ruling party ended Wednesday with the resignation of the embattled chief negotiator for the Saenuri Party.

“I am stepping down from my post as floor leader to uphold the will of the general assembly of lawmakers of the Saenuri Party,” Rep. Yoo Seong-min said in a press conference Wednesday afternoon. The announcement came shortly after lawmakers from the ruling party reached a consensus and recommended Yoo give up the post they elected him to in February.

The war between the president and the ruling party’s chief negotiator began on June 25, when Park issued a lengthy, angry criticism at Yoo for his “politics of betrayal.”

She condemned him for having made an unacceptable deal with the main opposition party and going after his own political gains, and then vetoed a bill the ruling party supported in a deal brokered by Yoo.

The ruling party has apologized to the president and boycotted a vote to override Park’s veto on Monday. To mend the rupture with the Blue House, the party held a meeting with its lawmakers Wednesday morning to decide Yoo’s fate. The floor leader had earlier said he would respect the decision either way.

About 120 of the party’s 160 lawmakers attended the gathering. Yoo was absent, along with chief policymaker Won Yoo-chul, who was Yoo’s running mate in February. Five lawmakers serving in Park’s cabinet also refrained from taking part as well as a few lawmakers currently abroad.

At the beginning of the meeting, Saenuri Chairman Kim Moo-sung gave an opening address and recommended Yoo step down for the sake of the party’s future.

Describing him as a lawmaker with the strongest loyalty and passion for the success of the party and the Park administration, Kim said Yoo was a precious asset to the party with many accomplishments. However, he added that Yoo’s resignation was unavoidable, as the party was destined to lose next year’s general election if the confrontation continued. “If we lose the general election, the Park administration will lose its momentum and it will be hard to win the next presidential election in 2017,” Kim noted.

He appealed to Yoo to sacrifice himself for the sake of the party and the country.

After Kim issued his statement, Saenuri lawmakers took turns speaking freely about the situation. While a few lawmakers reportedly demanded a vote of confidence, a consensus was reached without a vote after hours of discussion that Yoo resign.

Kim immediately headed to Yoo’s office and delivered the news.

The floor leader later publicized his resignation in a press conference. The announcement was short, taking less than four minutes to read. But he did not go quietly.

“I would have abandoned this floor leadership post if these were ordinary times,” Yoo said. “But I didn’t because there were values that I wanted to protect. They are laws and principles and justice.

“With my political life at stake, I wanted to protect the solemn values from Clause 1 of Article 1 of the Constitution, which stipulates that Korea is a democratic republic,” Yoo said. “Today may seem chaotic and painful, but I believe the country can only move forward when someone protects these values. If my two weeks of foolish stubbornness contributed to upholding the law and principles and justice in any way, I am more than happy to accept all criticism.”

Although Yoo did not directly mention the president in his statement, he made clear that the separation of powers was violated in the process of his being squeezed out because he was forced to step down on the president’s order.

Yoo then apologized for having failed to complete his term, although he promised the party to bring about change, reforms and victory in next year’s legislative elections.

In February, Saenuri Party lawmakers elected Yoo as floor leader based on his promise to put the party back at the center of policymaking and to change its way of doing business with the Blue House.

Park’s reaction was not made public on Wednesday. Presidential spokesman, Min Kyung-wook said the Blue House had no comment on Yoo’s resignation.

The Saenuri Party’s constitution says a new floor leader must be elected through a general assembly of lawmakers within seven days of the post becoming vacant.

It remains to be seen if the party will hold another election to fill the vacancies, because the split between Park loyalists and Yoo supporters could widen as a result.

Speculation has also grown that a new floor leader will be appointed through a process of consensus, not an election.

Yoo’s resignation demonstrated the influence the president has over the party. According to a Real Meter survey, Park’s approval rating went up slightly to 37.3 percent during the first week of July, up from 33.6 percent the previous week.