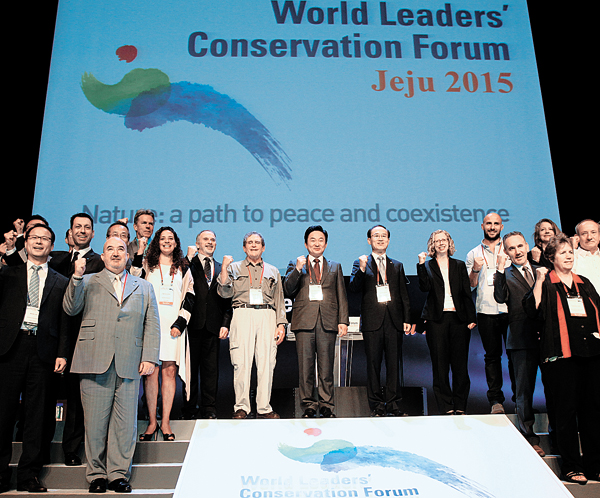 Invited environmental speakers and panelists prepare to discuss issues regarding the relationship between humans and nature during the opening address on Tuesday for the World Leaders’ Conservation Forum on Jeju Island. [NEWSIS]

The World Leaders’ Conservation Forum kicked off this week at the International Convention Center on Jeju Island, bringing together 43 prominent people in the environmental field for talks on nature and conservation.

In a subsequent debate Wednesday, Inger Andersen, the director general of the International Union for Conservation of Nature and Natural Resources (IUCN), Christopher Briggs, the secretary-general of the Ramsar Convention for wetland conservation, and author Alan Weisman concluded that the world must immediately pursue developments making it possible for humans to peacefully coexist with the natural world.

Weisman is the author of the book “The World Without Us” (2007), a work that considers what would happen if humans disappeared from the Earth.

His writing, which often has a focus on the issues arising from overpopulation, has been featured in The New York Times, the Los Angeles Times as well as in other major publications and science anthologies.

During his panel presentation Wednesday, he stressed that without addressing overpopulation, solving other environmental issues would be difficult. Pointing to the environmental costs of the world’s current population, Weisman stated that with just $8 billion, birth control could be made available to everyone worldwide, which would result in better family-planning policies and the distribution of other contraceptives.

The World Leaders’ Conservation Forum, co-hosted by the Ministry of Environment, the IUCN and Jeju Special Self-Governing Province, is an expanded version of the World Leaders Dialogues, a high-profile discussion series on environmental issues held during the 2012 IUCN World Conservation Congress, which was also hosted on Jeju.

Joining Weisman on Wednesday were speakers Jae C. Choe, president of the National Institute of Ecology; Anna Grichting, professor of architecture and urban planning at Qatar University; and Yvo de Boer, director-general of the Seoul-based international organization Global Green Growth Institute, among others.

All presentations, speeches and panel discussions were centered on the forum’s overarching theme, “Nature: A Path to Peace and Coexistence.”

Members of the public were also able to pose questions to speakers related to peace-building, coexistence, development and the environment via the forum’s website.