Spike in crimes by both teens, people retiring

Spike in crimes by both teens, people retiring 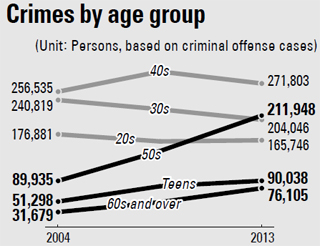 The number of teens booked for crimes in Korea increased by more than 75 percent over the past decade, and the number of middle-aged criminals more than doubled.

An exclusive analysis by JoongAng Ilbo reporters of statistics provided by the Korean Institute of Criminology from 2004 to 2013 shows that 51,298 teenagers were charged by the police for criminal offenses in 2004, a number that shot up to 90,038 teens in 2013, a 75.5 percent increase.

“In a society where families are disintegrating and schools are losing control over students,” said Lee Soo-jung, a criminal psychology professor at Kyonggi University in Suwon, Gyeonggi, “the statistics show that adolescents are increasingly deviating from the law.”

Lee pointed out that people in their 50s in Korea are in an unstable and vulnerable time around retirement, and people over 60 may be facing financial trouble.

A deeper look at statistics for charges of sexual crimes revealed that the same age groups - teens and people over the age of 50 - were worse off than a decade ago. Out of all sex crime charges, teens accounted for 9.4 percent in 2004 and 13.5 percent in 2013. The corresponding numbers for people in their 50s was 8 to 11.9 percent, and for people over the age of 60, 3.1 to 5.5 percent.