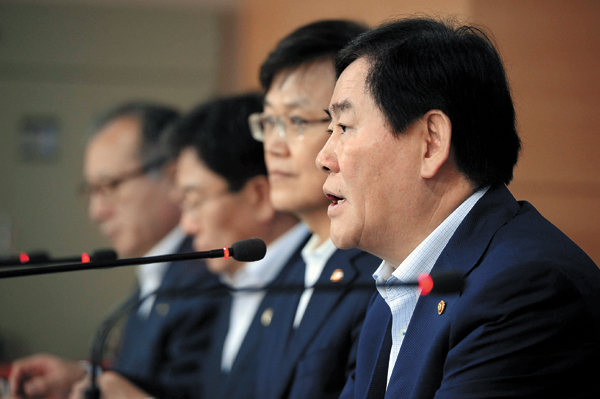 The government’s new export stimulus package comes with a price tag of 25 trillion won ($22 billion) over two years to boost foreign sales that have been sagging for the past six months. The money will go primarily to an expansion of export finance prog

But trade analysts say, “Been there, done that.” They point to efforts started in the first half, and complain that the best thing Seoul could do to boost trade is to fix the currency.

The export support plan is one of a group of trade and investment packages that are valued at 116 trillion won if private sector spending support is included.

The measures were presented to the Blue House staff by the Finance Ministry and the Trade Ministry at Thursday’s Trade and Investment Promotion Meeting.

“The government should take all measures possible, including the new supplementary budget, to encourage the private sector to invest,” said President Park Geun-hye at the meeting. ”It should expedite implementation of such measures to encourage domestic consumption as soon as possible so that we don’t miss a golden time for economic revitalization.”

The government believes Korean exports face a crisis as local products lose competitiveness because of the weak yen and euro; domestic consumption slowed after the outbreak of Middle East Respiratory Syndrome and a nationwide drought.

Many government officials worry that the multiple problems may reduce Korea’s total trade volume to less than $1 trillion, a level not seen since 2010. The first-half trade volume will probably be only about $491 billion, far below the initial goal.

“Korea has seen its trade volume exceed $1 trillion every year since 2011, and hit a record high of $1.1 trillion last year,” said a senior official at the Trade Ministry, “but considering the first-half trade volume, we forecast that Korea may not be able to reach the $1 trillion mark.”

Of the 116 trillion won in spending planned by the Trade Ministry, 91 trillion won is from private companies who have accelerated their investments, mostly in production facilities expansion, after some government arm-twisting to make them open new production lines in Korea instead of overseas.

Fifty-six companies will invest that 91 trillion won in 69 projects scheduled to come online beginning in the second half and continuing through 2016. The semiconductor and display industries are slated to make the largest investments, worth 58 trillion won, followed by the steel, petrochemical and refinery industries with 21 trillion won and another 12 trillion won from automakers.

In addition to those private sector investments, the government will spend 25 trillion won in policy support measures.

The new export financing support programs are worth 650 billion won to manufacturers damaged by the weak yen and euro and to flagship export producers like the steel and automotive industries.

To assist the private sector to invest more, the finance and trade ministries will cut tariffs on key manufacturing machinery for making products like OLED panels.

The government said it is also pushing policies to encourage local companies to acquire foreign companies to weaken the won further. Korea’s 39-month string of current account surpluses has boosted the country’s foreign exchange reserves and kept the won at a higher level that policymakers and businessmen think is warranted.

The so-called “One-shot” Act, which is designed to lift barriers in tax law, corporate law and fair trade law for conglomerates who want to merge affiliates, was submitted to the National Assembly on Thursday..

Deputy Prime Minister Choi Kyung-hwan acknowledged that a long-term export promotion plan is not in the new package, but said he would work on one to reset the position of Korea’s leading exports against Chinese and Japanese rivals.

Other policies were also announced at the Trade and Investment Promotion meeting to promote the construction and tourism industries.

Easing regulations on the floor space ratio for old buildings and apartments was included, to encourage builders to redevelop aging buildings in central city areas.

If approved by the local government, several older buildings in a single area could average their floor space-ratios, giving builders somewhat more flexibility. The number is the total floor space of a building divided by the area of the land it sits on. So for example, if an area’s maximum floor space ratio is is set at 400 percent, which would limit construction to a 4-story building, owners of other buildings in the area can share their ratios and allow the building closest to a main street to be higher than others. That building would generate more revenue because of its proximity to a major street; that increased revenue would be shared pro-rata with the owners of other buildings participating in the group.

The measure is a result of a situation where 39 percent of Korea’s buildings that are 30 years old or more are in areas where builders can’t redevelop them economically because they are forbidden to make the replacements taller.

In other developments, to shore up the tourism industry badly hit by the MERS virus, the government said it would start this year’s Korea Grand Sale in August, somewhat earlier than usual.

The four major palaces in Korea will be open free of charge in July. K-pop concerts are being held in India and elsewhere in July and August.

Fees for group tour visas to Korea will be waived for tourists from China, Vietnam, Indonesia, the Philippines and Cambodia.

Chinese tourists will be allowed to visit Korea without a visa starting July 6 if they also have a group tour visa to Japan and tickets for a return flight hope within 15 days of their arrival in Korea.

“Many Chinese tourists tend to visit Korea during their journeys to Japan, transferring at Incheon,” a Finance Ministry official said. “So we exempted them from visa requirements if they have a group tour visa to Japan. This benefit is permanent.”

Most of the Trade Ministry’s policies though, are extensions of existing remedies that have been in place since April, when the government introduced an emergency export-boosting package that looks similar to Thursday’s proposals. That drew criticism from analysts who said little was being done to weaken the won, whose value, they say, is the real culprit in Korea’s current problems.

Kim Jung-sik, an economics professor at Yonsei University, said, “it seems like the government doesn’t feel that the foreign exchange issue is risky.

Another academic economist agreed. “Back in 1995, when the yen appreciated to less than 80 per U.S. dollar, the Japanese government launched a campaign called ’80 yen factory,’ which created cost competitiveness by boosting production efficiency,” said On Ki-woon, a professor at Soongsil University. “The won’s situation is urgent, but the government’s policies don’t reflect the reality enough.”

The Federation of Korean Industries invited the presidents of 27 conglomerates, including Samsung Electronics, Hyundai Motor and SK, to an emergency meeting Thursday morningat its headquarters in Yeouido. The businessmen issued a plea to the government for more substantive foreign exchange policies to minimize the impact of the weak yen.

“The Korean economy today is faced with more serious risks than in the past because the real economy is shaking, with a sag of our overall industrial structure and not just in the financial sector,” said FKI Vice Chairman Lee Seung-cheol.

“For us businesses, foreign exchange issues like the weak yen and euro are a huge concern,” Lee added. “We need countermeasures to those external situations.

At the meeting, the private sector leaders also promised that they would invest to contribute in revitalizing sagging domestic consumption by pushing up planned investments, participating in efforts to attract foreign tourists back to Korea and by spending money to revive consumption.