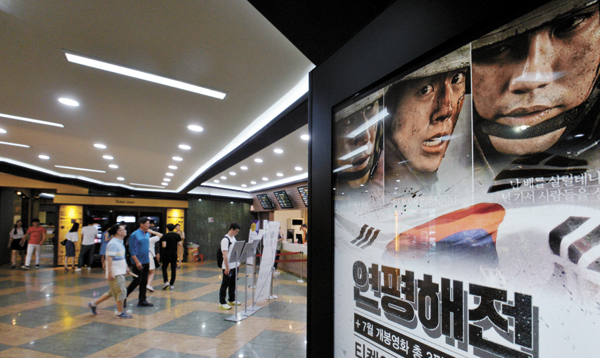 Kim Hak-soon’s war drama “Northern Limit Line,” which tells of the 2002 Second Battle of Yeonpyeong, is enjoying a good run at the box office. Since its release on June 24, the film has sold more than 3.6 million tickets. [NEWSIS]

Two similar movies based on real events opened last month, but their fates have been totally divergent.

The film that’s an unqualified hit is Kim Hak-soon’s war drama “Northern Limit Line,” which tells the tale of the Second Battle of Yeonpyeong, which broke out between North and South Korean naval ships around the de facto maritime border in 2002.

Kim Sung-je’s “Minority Opinion,” on the other hand, which is also roughly based on a true incident called the “Yongsan Tragedy” that happened six years ago, only sold 352,925 tickets. The story tells of a violent confrontation between people being evicted in an urban renewal plan in Yongsan District during which five civilians and one police official were killed.

Currently, the film is only being screened in a select number of theaters.

Prior to the movies’ release on June 24, industry insiders expected them to go neck-and-neck at the box office not only because they came from different poles on the political spectrum - conservative for “Northern Limit Line” and progressive for “Minority Opinion” - but also because they went through a similar set of hardships in getting made.

Both films struggled to find distributors reportedly due to their socially and politically sensitive issues.

“Northern Limit Line” was panned by movie critics while “Minority Opinion” got much better reviews.

Lee Dong-jin, a popular film critic, wrote in his blog that “Northern Limit Line” is “rigid” and “lifeless.”

Critic Kang Yoo-jung said that the film was “full of typical traits that make it so easy to predict.”

But while predictable, a plotline that oozes patriotism has a certain appeal to the popcorn-guzzling crowd.

“The film is easy to sympathize with because it is easy to follow,” said Kang.

“The fact that it revolves around three naval soldiers who actually fought in the battle 13 years ago helped the audience follow the plot more attentively. Watching people die and mourning with them is a formula for a film that easily gains empathy from the viewers,” she added.

Culture critic Hae Jae-keun added, “If you are a Korean, it is hard to resist tearing up when seeing our soldiers fall before our eyes.”

On the other hand, “Minority Opinion” is a courtroom drama that follows a fierce legal battle by a public defender fighting the government on behalf of a falsely accused protester whose son was killed during the demonstration.

It requires a considerable amount of legal knowledge to follow the plot. And the issue of redevelopment and conflict between evicted tenants and people or governments who want to redevelop the area is not the kind of slam dunk that a patriotic war film is. The issue truly divides Korean society.

“In terms of subject matter ‘Minority Opinion’ is heavier,” Kang said. “It makes people think about an issue that has not been resolved while ‘Northern Limit Line’ depicts something that is very unfortunate but already finished and we can’t do anything about it anymore.”

Especially at a time of drought, a weak economy and right after an outbreak of Middle East respiratory syndrome (MERS), people tended to want a patriotic tear-jerker rather than a socially conscious movie.

“When relieving stress, they want to get as far away from reality as possible,” Kang added.

Spectacle is another vital factor behind the war drama’s success.

Thanks to a successful crowdfunding project and a major investment from the Industrial Bank of Korea, the movie contains a lot of action including the 30-minute maritime battle scene.

“Lately, domestic films have been restricted to small films with a limited number of people in a constrained space,” said Ha. “The craving for something extravagant has been finally resolved.”

The number of screens showing each film contributed to the box office scores as well.

“Northern Limit Line” which partnered with NEW, one of the main distributors in Korea, started off with 667 screens while “Minority Opinion” was only able to get 378 through its smaller distributor.

On the fifth day of its run, “Northern Limit Line” was being shown on 1,013 screens. There are a little more than 2,000 screens in total nationwide.

“For those who go to the movies casually and without much planning, it’s likely that they choose what the theater is offering at the time,” Kang said.