Leaving inner circle and being asked to return

Leaving inner circle and being asked to return 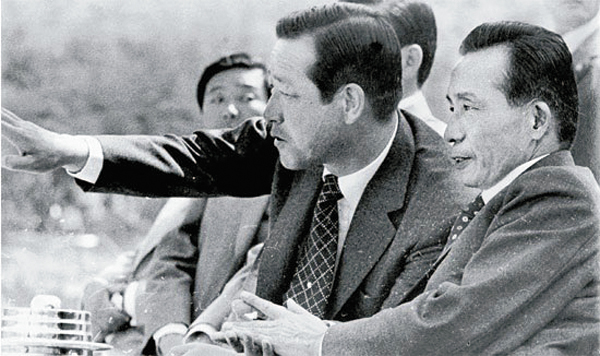 Kim Jong-pil talks with President Park Chung Hee during a presidential campaign rally on April 15, 1971, in Chuncheon, Gangwon. In the 1972 election, Park was elected for his third term, defeating his rival Kim Dae-jung by a margin of 950,000 votes. Provided by Kim Jong-pil

I was getting increasingly disillusioned by the endless struggle for power within President Park Chung Hee’s inner circle. Of those around President Park, six wanted nothing more than to see me pushed out completely. The so-called six-member group was comprised of Kim Sung-kon, Baek Nam-uck, Kim Jin-man, Kil Jae-ho, Lee Hu-rak and Kim Hyung-wook.

The six powerful men spread a groundless rumor that I formed an internal faction within the ruling party to run for president. President Park began to doubt me and worried that I would one day try to bring him down.

Sensing Park’s growing distrust, I was more disappointed with him than I was with my six rivals. While it may be true that competition for power is the very nature of politics, which inevitably involves criticizing others and pointing out rivals’ weaknesses and one’s own strengths, politics is also work for the people. There should be some level of trust among those involved in it. 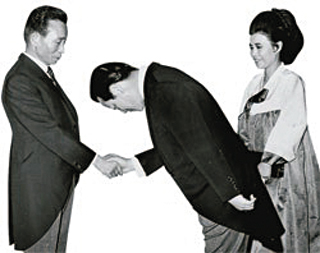 Prime Minister Kim Jong-pil bows in a New Year greeting to President Park Chung Hee on Jan. 1, 1972. Next to him is his late wife Park Young-ok. Appointed as No. 2 in the government in June 1971 at the age of 45, he kept his job for four years and six months until December 1975. [JoongAng Photo]

As the rumor gained strength, I decided the time had come for me to let it all go. On May 30, 1968, I announced my retirement from politics and resignation from all government positions. I left for Haeundae Beach in Busan with my wife Park Young-ok.

Once I discarded all the political burdens that had weighed me down, I felt free. I spent hours and hours overlooking Haeundae Beeach from the Far East Hotel. But it didn’t take long for President Park to realize he needed me. He sent chief of staff Lee Hu-rak to Busan to persuade me to change my mind.

“The President thinks it’s not the right time for you to resign,” he said. A string of other senior government officials and lawmakers including Cho Si-hyung, presidential secretary for political affairs, paid me visits to persuade me to return to politics.

I declined them all, firm in my decision that I would withdraw my party membership and give up my parliamentary seat.

At the time, if one gave up a party membership, you automatically lost your parliamentary seat. When I was right next to President Park, he couldn’t stop monitoring me because of his worries about my political potential. Now that I was far from Seoul, he felt I was badly needed. I assumed that was the underlying mind-set of people at the height of power.

On June 3, my application to quit the party was officially processed, which led to the loss of my assembly seat. On the same night, my wife and I flew to Seoul from Busan to see President Park at the Blue House. I had a one-on-one meeting with Park.

Stepping into his office, I shouted, “Sir, do you think I want to become like Nasser?”

My question to Park was meant to highlight my disappointment and hurt feelings. It was the first and last time I challenged him.

The president did not understand the reference. “What do you mean?” he asked.

I explained that Gamal Abdel Nasser of Egypt brought down his predecessor Muhammad Naguib, after the two had led a revolution to overthrow the monarchy in 1953.

“Nasser put Naguib under house arrest and ousted him so that he could take the highest office. Do you think I will do the same thing?”

After taking some minutes to ponder, Park said, “Well… You never know.” I was overwhelmed by a sense of disappointment in all I had done for him. His answer implied that I could become a Nasser. And on that note, he thought he was justified in his continuing efforts to keep me in check.

Following my meeting with him, we had dinner together with our wives. My wife Young-ok, who was Park’s niece, cried during the meeting. “You think you can find someone as loyal to you as my husband?” asked Young-ok. Park said nothing. Neither did I.

The true meaning of patience is when you bear something that seems unbearable. Through so many ups and downs in my life, I have learned that lesson and lived my life with that underlying principle.

On June 5, 1968, I stepped down from all positions in politics. Yun Chi-young succeeded me as acting chairman of the Democratic Republican Party (DRP). With all of my political responsibility gone, I enjoyed my time as a carefree man. I toured the country and painted landscapes.

With their biggest obstacle removed, the six men wielded unrestrained power. They began hatching a plan to amend the Constitution to allow President Park to run for a third term.

I had already predicted their move to open a pathway for Park to remain in power. He was barred from seeking a third term under the Constitution amended in 1962.

I also knew that President Park, who hesitated to run for office right after the May 16 revolution [the 1961 coup], himself wanted to remain in power with a sense of renewed confidence drawn from his last seven years running the country.

The six men, who were desperate to maintain their own connections to power, tried to bring him over to their plan, saying he must continue to lead the nation.

I opposed their plan. During a campaign for general elections in 1967, I publicly stressed many times that the ruling party would not support such a Constitutional Amendment even if it won two-thirds of the parliamentary seats. The DRP won a majority with 129 seats, 12 more than the number of votes needed to pass a Constitutional revision.

On Jan. 7, 1969, when I was working on starting a tangerine orchard on Jeju Island, DRP acting chairman Yun Chi-young held a press briefing to announce the party’s plan to seek the Constitutional amendment so that Park could maintain his leadership. Yun’s announcement marked the beginning of the official push for the amendment.

Park echoed the idea in a New Year’s press briefing by saying political circles could discuss the issue later that year or the following year if they felt the need for the change.

I knew Yun’s announcement was made at the behest of the six members in the inner circle. I felt big trouble was on its way.