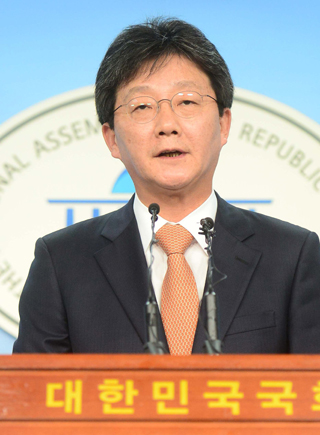 The former floor leader of the country’s ruling party saw his public following skyrocket in the aftermath of a political war with the president, elevating him as the second-most favored potential presidential candidate for the Saenuri, the latest survey showed.

Rep. Yoo Seong-min, 57, a three-term lawmaker representing Daegu’s Dong B District, stepped down as the ruling party’s floor leader on Wednesday after a tense standoff with President Park Geun-hye.

His newfound popularity was evidenced by an immediate poll conducted by Real Meter the same day, particularly among survey participants questioned about possible presidential contenders for the Saenuri Party.

JTBC, the cable TV network of the JoongAng Media Group, commissioned the poll in which Yoo was ranked second with 16.8 percent support, trailing behind Saenuri Chairman Kim Moo-Sung within the margin of error. 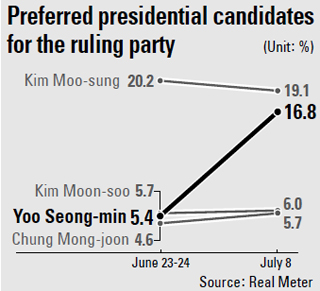 Kim was ranked first among presidential hopefuls for the ruling party, with 19.1 percent. The poll had a margin of error of plus or minus 4.4 percentage points, with a 95 percent confidence level.

In that survey, Kim Moo-sung was once again on top with 20.2 percent. Oh came in second with 6.2 percent, with Kim Moon-soo at 5.7 percent.

But although Yoo lost his battle with Park, some political analysts say he may have gained more from defeat.

“The president gained nothing,” said Kang Won-taek, a political science professor at Seoul National University. “The disharmony between the Blue House and the ruling party was evident and she failed to control it.

“Yoo however, profited. He became a national figure, and even young people now know him,” Kang said. “Right now, he has been given a political check to be cashed in later. Park lost.”

However, Lee Cheol-hee, a political analyst at Doomoon Political Strategy Research Institute, expressed doubt that the former floor leader would even be able to win the Saenuri nomination in next year’s general elections, an outcome that was staunchly denied by Lee Hye-hoon, formerly on the ruling party’s Supreme Council.

“We’re no longer living in an era where the people just obey orders from [the president],” she told JTBC. “In fact, it backfired and more people are supporting Yoo now.”