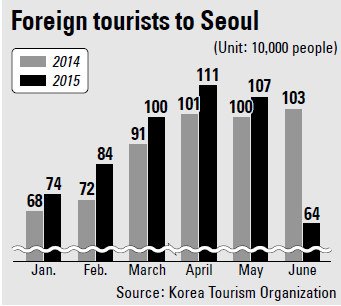 The Seoul Metropolitan Government, perhaps the most active authority in quarantine efforts for Middle East respiratory syndrome (MERS), has shifted its efforts to deal with the aftermath of the outbreak, specifically on the hit to the tourism industry.

The city government on Thursday released an extensive plan aimed at attracting foreign tourists and putting the beleaguered tourism sector back on track by China’s National Day holiday that starts on Oct. 1.

In June, the number of visitors to Korea - mostly from China - stood at about 640,000, down from 1.03 million in the same period last year, according to the Korea Tourism Organization. Inbound tourist reservations in July and August have been cut down to only 18 percent compared to last year, with an estimated loss of 108.5 billion won ($95.7 million).

“We’re planning to emphasize that it’s actually a better time for tourists to visit - that they get more benefits while tourism is depressed from the MERS outbreak,” said Kim Ui-seung, who heads the Culture, Sports and Tourism Headquarters.

The city government is currently offering bargain sale seasons until October in an effort to bring back foreign tourists, starting with a summer sale in July and the Korea Grand Sale from August to October in collaboration with the Visit Korea Committee.

A variety of cultural events are planned in the lead-up to October, including city government-sponsored summer festivals, night markets and performances. During the Chinese holiday season, from Oct. 1 to 7, a large-scale K-pop star concert is scheduled alongside the Seoul International Fireworks Festival and the Seoul Bazaar Festival.

But the city government’s overall intention is to dissipate concerns over the MERS outbreak. Seoul Mayor Park Won-soon, who volunteered to become the head of the tourism countermeasure headquarters, is in the process of planning visits to major cities across China and Southeast Asia to provide reassurance about the disease.

The number of MERS cases in Korea has not increased over the past four days, since Patient No. 186 was confirmed on Sunday.

He is slated to stop by Namsan and the castle walls nearby on Tuesday with Korean Air’s invitees, then visit Myeong-dong with Asiana Airlines’ guests on Thursday.

Promotion via television programming is also in the works. The city government is currently considering shooting the SBS variety show “Running Man,” probably the most famous Korean TV program in China and Southeast Asia, in various tourist spots like Myeong-dong in central Seoul.

For its overall tourism plan, the Seoul Metropolitan Government is weighing setting aside 16 billion won in supplementary funds, a decision that is expected to be finalized this month.

“The MERS outbreak may be the biggest crisis for the tourism industry, but it might be a chance to take another leap if we can be wise in solving the issue,” Kim said. “The city government won’t hesitate to revitalize the tourism industry in Seoul.”