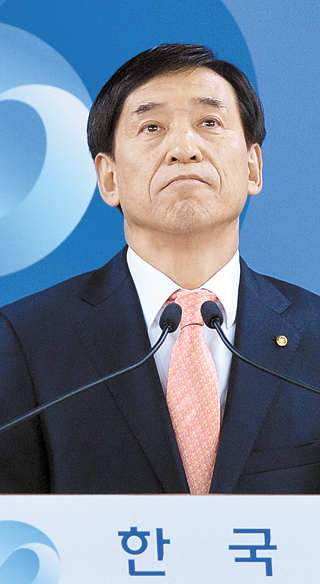 The Bank of Korea lowered its economic outlook for 2015 from 3.1 percent to 2.8 percent, largely because of the impact of the Middle East respiratory syndrome (MERS) outbreak and an ongoing drought.

The revised outlook includes a 0.3-percentage point additional growth that is expected from a government stimulus package worth 22 trillion won ($19 billion) that is still waiting the approval of the National Assembly. Without it, growth would only be 2.5 percent.

This is slightly higher than an earlier projection by BNP Paribas, which revised its outlook to 2.7 percent last month, but lower than the Finance Ministry’s 3.1 percent.

“In April, we estimated that growth in the second quarter would be 1 percent but because of the unexpected outbreak of MERS overlapping with the drought, we have significantly lowered our outlook to 0.4 percent,” Bank of Korea Governor Lee Ju-yeol said. “The impact of the drought as well as the MERS situation was much larger than we anticipated.”

However, the governor retained his optimism that the situation in the second half will improve, resulting in a mild recovery.

“It will depend on how fast economic participants’ sentiments improve,” Lee said. “As we entered July, the contraction in consumption has eased substantially, and we are expecting a recovery in domestic consumption once the MERS situation stabilizes soon.

“One question is whether the number of tourists coming to Korea will recover to the normal level,” Lee said.

Although Lee acknowledged that there are numerous downward risks, including the Greek debt situation, a slump in the Chinese economy and interest rate hikes by the U.S. Federal Reserve later this year, he dismissed concerns that the Korean economy might have entered a permanent low growth rate of 2 percent.

“I think it is a groundless concern,” Lee said. “Although we have lowered our outlook for this year, that is because of unexpected impacts. Next year, we expect 3 percent growth.”

The governor stressed that the central bank’s rate cut of 0.25 percentage points in June to the all-time low of 1.5 percent was a preemptive move to prevent the economy from settling into a perpetual low-growth cycle.

Lee said that along with downward risks, the rapid turnaround of the MERS crisis could also help the economy rebound.

Some experts speculate that this may not be the end of the central bank’s rate cuts, especially with risks threatening a growth rate in the upper 2 percent range.

“We think the supplementary budget will have a relatively limited impact on growth,” said Joseph Incalcaterra, an economist at HSBC. “A large chunk of the new expenditure is destined for compensating for a fall in tax revenues, while the rest will be limited to assisting the sectors impacted by MERS and the drought.”

The economist forecast 2.8 percent growth, which is in line with the BOK’s forecast. But he added that growth could further retreat below the 2.8 percent level due to various downside risks.

“We think that concerns over growth will rise going forward and that the ‘recovery’ may not be as robust as hoped,” Incalcaterra said. “Together with the virtual absence of inflation pressures, the BOK will likely cut rates by September.”

Moody’s released a similar outlook on Wednesday projecting that the Korean central bank could cut the key interest rate to 1 percent by 2016.

“Spiking household debt has the central bank concerned, but further cuts are on the table as the economy struggles with the outbreak of MERS,” said Emily Dabbs, an economist at Moody’s Analytics.

The recent spike in household debt is a major factor that keeps the central bank from aggressively pursuing another rate cut.

On Wednesday, the central bank released a study that showed that in June, the country added 8.1 trillion won in additional household debt.

Household debt has been growing at a rapid pace since the central bank first lowered the key interest rate to boost the economy last August. Since then, it has made three additional rate cuts. The most recent was last month. 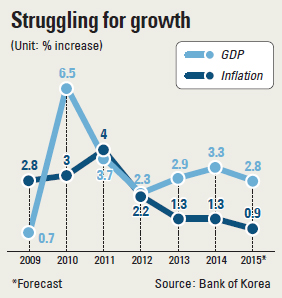 Meanwhile, the International Monetary Policy on Thursday released a global outlook that was lower than the previous estimates. Although the outlook for the Korean economy was not released, it lowered its estimate for global economic growth from the 3.5 percent projected in January to 3.3 percent.

The outlook was revised as economic growth for both the advanced economies and emerging markets were lowered from January’s.

The growth of advanced economies including North America, Europe and Japan was revised from 2.4 percent to 2.1 percent. The IMF said that in the case of North America, it lowered its outlook due to the sluggish output growth in the first quarter and shaved off 0.6 percentage points off its earlier projection to bring it to 2.5 percent.

Emerging markets, including China, India, Russia and Brazil, saw a cut of only 0.1 percentage points, mild compared to that of the advanced economies, to bring the estimate to 4.2 percent.