OB struggles to hold on to Mongolia sales

OB struggles to hold on to Mongolia sales 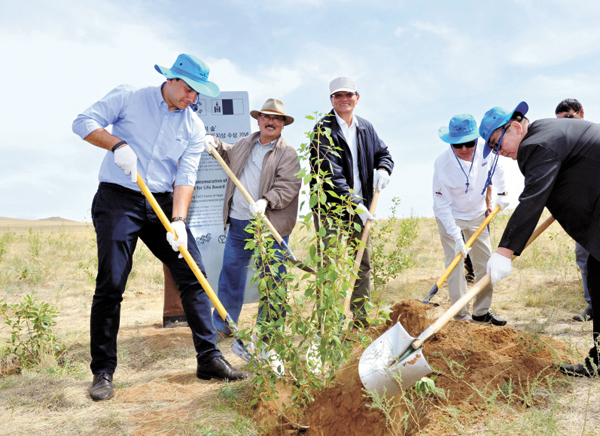 Oriental Brewery Company’s CEO Frederico Freire Jardim plants a commemorative tree Tuesday in front of a monument to celebrate winning UNCCD’s Land for Life Award in Erdene Sum, east of Ulan Bator. The forestry project is one of OBC’s corporate responsibility programs in Mongolia, which is intended to prevent desertification and give jobs to local nomads. Provided by the company

ULAN BATOR, Mongolia - For Korean beer manufacturer Oriental Brewery Company, the land of Genghis Khan is not just the largest importer of its flagship product, sudsy Cass beer, but kind of a brother country where it is willing to share some of its profit for the sake of its environment.

On Tuesday, in the middle of a wilderness called Erdene Sum, a desert scrubland about 70 kilometers (43 miles) east of Ulan Bator, dozens of people gathered at a small forest of poplar trees dubbed the Cass Forest of Hope. They were there to celebrate the receiving of the UN Convention to Combat Desertification’s Land for Life Award 2014, which was awarded last March.

“Since 1999, Mongolia has been our market, so naturally, we at OBC kept our eye on the Mogolian desertification issue, which affects Korea and all of Asia,” said Frederico Freire Jardim, CEO of OBC, in remarks at the ceremony. “The Cass Forest of Hope project will be continued until the forest of Erdene Sum turns green and I would like to request our dear participants to keep supporting our project.”

At the ceremony, Freire and other participants unveiled a commemorative monument and planted a tree. 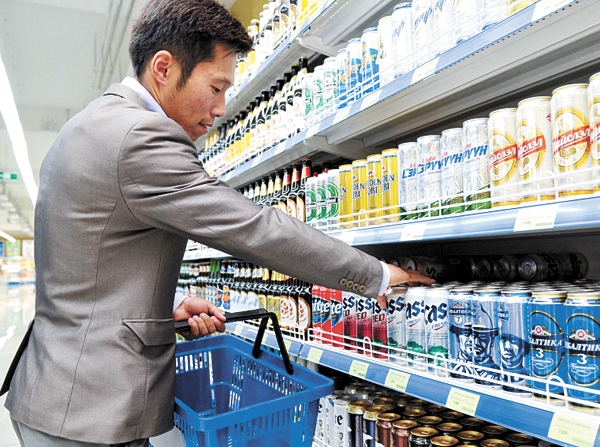 A local customer buys Cass at a mall in Ulan Bator on Tuesday. Despite a price 20 to 30 percent higher price than for local beers, the wholesaler says Cass is the most popular product in the premium beer market. Provided by the company

The Cass Forest of Hope project kicked off in 2010 with the goal of planting 150,000 trees by 2020. The idea is to turn a wilderness into a windbreak to prevent Mongolia’s stiff winds from eroding the soil. The project is also contributing to the local community by giving jobs taking care of the forest to local nomads. OBC is spending 1 percent of all its sales in Mongolia on the forestry project.

The ceremony was proof that Mongolians appreciate OBC’s efforts. Among the attendees on Tuesday were Ulan Bator Vice Mayor Bat Erdene, who was there to offer a plaque of appreciation to OBC, and Dorjgurkhem Batbold, a director from the Ministry of Environment and Green Development.

“Desertification is a problem not only for Mongolia but for all of Asia,” said Erdene at the ceremony. “This is a model case in that [OBC], beloved by Mongolian customers, is sincerely engaging in solving environmental problems of Mongolia.”

OBC is also supporting scholarships for the impoverished and the country’s athletes. The national Taekwondo team, for example, has been sponsored by OBC and its local wholesale partner Cass Town. Partly as a result, Mongolia’s Taekwondo team won its first medal last year in the Asian Games held in Incheon, Korea, the homeland of martial art. It took home a bronze medal.

But Cass is facing challenging times in Mongolia, where it is sold as a premium brand. Cass enjoyed a 60 percent share of the local beer market share in its early years, but that has shrunk to approximately 4 percent as of 2014, according to Cass Town.

“Cass had a large market share when it was introduced in 1999 and 2000 because that was before the beer market was properly developed,” said Cass Town President Enkhbat Dambadarjaa. “As Cass developed the market, local beers like Sengur and Borgio emerged and the government imposed a 25 percent tariff on import beers in recent years.”

Moreover, since Cass is positioned as a premium beer in Mongolia, with a 20 to 30 percent higher price than local brews, tough economic times in the past couple of years have depressed Cass sales in Mongolia. According to Cass Town, the Mongolian Tugrik has weakened from 1,400 tugrik to the U.S. dollar in 2013 to 1,950 tugrik this year and overall consumption in the country has drastically decreased since 2014.

But the heads of OBC and Cass Town are staying optimistic about future growth in Mongolia thanks to the value of the Cass brand that has been built over 16 years and due to its positioning in the premium beer bracket.

“Our market share here may have shrunk as the market grew more competitive, but I anticipate it won’t go down further,” OBC CEO Freire Jardim added. “The economic situation isn’t very good at the moment, but Cass will be popular again once the situation gets better.”