Songdo International City in Incheon is under continuous construction. The overarching goal is to build a dynamic and versatile urban city that is home to numerous multinational companies and international families working and living in state-of-the-art high rises.

On the outside, the development of the most sophisticated city on the west coast seems to be well underway. But when you look at Songdo a little more closely, you can see it still has a long way to go.

One of the biggest struggles Songdo faces in becoming an international city is attracting international companies. Since 2004, the city has been trying to convince foreign companies to open up business there. 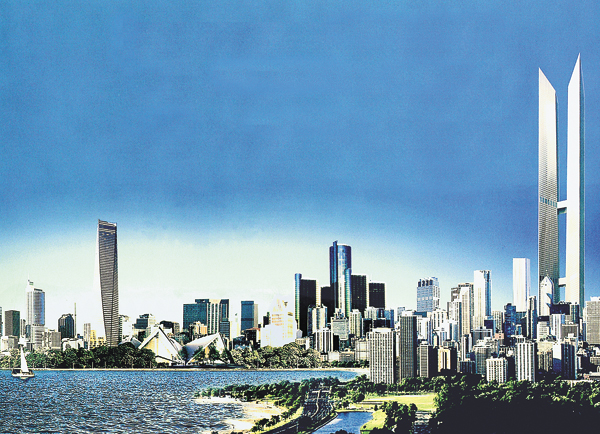 As of May, there have been 58 investments made by foreign companies amounting to roughly $3.37 billion. The investments made by Korean companies during the same period numbered 30 and amounted to 3.6 trillion won ($3.6 billion). There are roughly 13 big and small international institutions in Songdo city including the UN’s Green Climate Fund.

As of 2013, there are 836 companies operating some kind of business within the city. The major Korean companies are Posco E&C, Posco Engineering, Daewoo International, Samsung Biologics, Samsung Bioepis and Kolon Global. The rest are small and midsize companies.

It would be easy for Songdo to attract major foreign companies if the headquarters of major Korean conglomerates relocate to the city. But such cases are rare. In the case of the construction arm of the nation’s No. 1 steel manufacturer Posco, it relocated to Songdo because it is involved in most of the development projects. For other conglomerates, there are no good reasons to move out to the west coast.

Even with its fancy business district, convention center and international school, Songdo still falls far short of other major international cities in Asia such as Hong Kong or Singapore. And its biggest competition lies not very far to the east: Seoul itself.

“It is true that in the case of Songdo, we have taken the shape of an international city,” said Ji Chang-yeol, a development and planning official at the Incheon Free Economic Zone (IFEZ) Authority. “However, we have had difficulties attracting major Korean conglomerates that would help bring in foreign companies due to the large number of property- and development-related regulations.”

The city in Incheon has attracted middle and upper class investors from posh Gangnam with its grand ambitions. Many believed that the city had high development potential. 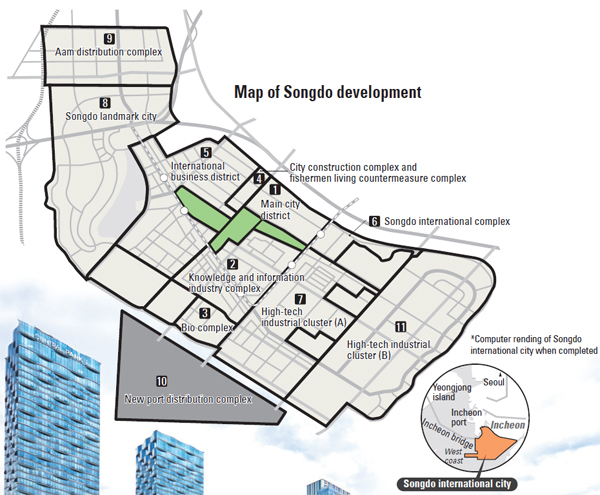 Today, the skyline is filled with high rises including a trade tower that is 68 stories high. Various events and conventions are held at the Songdo Convensia.

The popularity of the Chadwick international school knows no bounds. Some of Korea’s rich and famous have relocated to Songdo just so their children could enroll in the school.

The Jack Nicklaus Golf Club in the southwest of the city near the west coast has been holding local and international golf tournaments. The PGA’s Presidents Cup is scheduled to take place in October there.

The 370,000-square meter (442,516-sqauare yard) central park in the heart of the city has been attracting large numbers of visitors every weekend, including from outside the city.

At Songdo’s knowledge information complex, the city is working on creating an industrial cluster that can host local and foreign companies’s research and development centers. One of such center is Samsung Biologics. 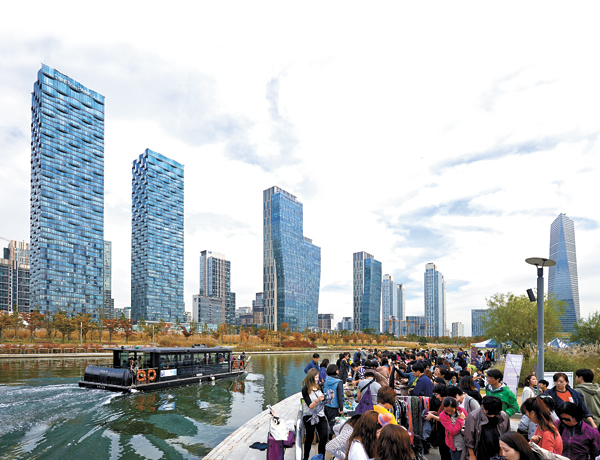 Songdo International City is divided into 11 areas of developments. The total area is 53.4 square kilometers, which is 18 times the size of Yeouido in Seoul. The initial plan was to invest 21.54 trillion won from 2003 and finish all projects by 2020.

The main city district has been completed and the knowledge and information industry complex and bio complex are nearly complete.

The so-called landmark city will be constructing housing for 26,000 households, and business and commercial buildings. Originally, the city was planning two 151-story buildings. That plan was scrapped after the global financial meltdown in 2008.

“We’re redrafting our plans for the landmark city, which will likely delay the development significantly,” said Park Young-suh of the IFEZ Authority.