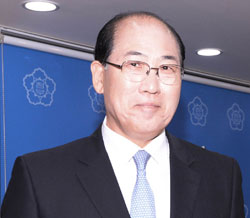 Lim Ki-tack, 59, CEO of the Busan Port Authority, was elected as secretary general of the International Maritime Organization (IMO) last week by the IMO Committee in London.

The International Maritime Organization, a specialized United Nations agency, serves as a regulatory framework for the international shipping industry.

Lim is the first Korean to be selected as its secretary general.

His four-year term in office begins in January, though consecutive terms are possible.

“I will do my best and thoroughly prepare,” he said. “U.N. Secretary General Ban Ki-moon has done so much for international society, so I will meet with him and learn from him to revive Koreans’ pride while at the IMO.”

Initially Lim was an unlikely candidate. The election contained contenders from six countries, including Denmark, the Philippines, Russia, Cyprus and Kenya, and among them, Denmark - with concrete support from Europe - led the race.

Lim and the Korean government approached a variety of Central and South American officials to gain support ahead of the vote. President Park Geun-hye also appealed to IMO member countries during her tour of South America in April, reaching out to Brazil, Chile and Peru and encouraging them to throw their support behind Lim.

Panama, one of the world’s biggest maritime nations, endorsed Lim on June 24.

“Securing Central and South America as our foundation of support through President Park’s South America tour contributed considerably to our election strategy,” he said.

The IMO’s election regulations were also used to Lim’s advantage. When there is no first-past-the-post winner, the agency excludes the lowest polling candidates and carries out a revote that continues until a single candidate gains a majority vote.

“The mock analysis showed that we would get few votes in the first polls,” explained Minister of Oceans and Fisheries Yoo Ki-june. “It was important to persuade the eliminated countries to support Korea.”

The plan worked for Lim, who was 10 votes behind the Danish candidate, with 12 votes in the first poll. But in the second poll, Lim overtook Denmark by 14 votes, and in the final sixth poll, Lim stood with 26 votes to 14 - a dramatic turnaround.

“Because I had a chance to observe the maritime authorities from foreign countries, I thought I could work for the government, too,” Lim said regarding his switch from sailor to civil servant.

“But the government position’s comparatively low salary made the decision difficult,” he added.