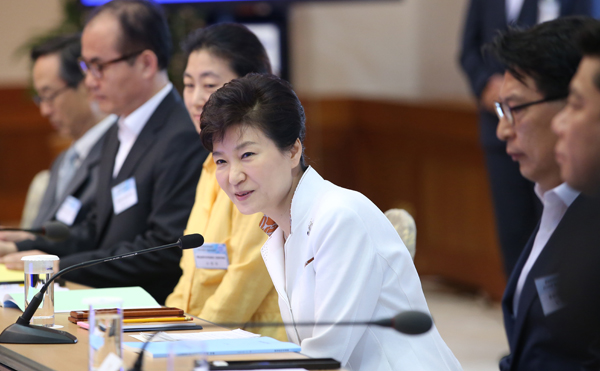 President Park Geun-hye, second from right, presides over a meeting with civilian members on the presidential Committee for Unification Preparation on Friday at the Blue House. By Park Jong-keun

President Park Geun-hye on Friday stressed the need to devise a “medium to long-term solution” to help North Korea with disease control and prevention, starting off by providing vaccines and antibiotics to counter tuberculosis (TB) and German measles.

Speaking at a morning meeting at the Blue House with civilian members on the presidential Committee for Unification Preparation, Park did not specify how she planned to put the idea into practice, but insisted that the gesture would better the chances for inter-Korean unification.

Friday’s statement came a few months after the local government approved an aid plan in late May of 10.6 billion won ($9.7 million) under the Inter-Korean Cooperation Fund, set up to support mutual exchanges and cooperation between the two countries

Of that, the biggest amounts were announced to go to the United Nations Children’s Fund (Unicef) and the World Food Program (WFP).

Unicef will be allocated with $4 million to help North Korea obtain vaccines and other medical supplies, while the WFP will be provided with $2.1 million to deliver nutritional products to needy mothers and children, the government said.

The president further hinted that if North Korea were to cooperate with neighboring countries in the health and medical sectors, it would herald in a “healthy, safe Northeast Asia.”

Seoul and Pyongyang share the responsibility of protecting the Korean Peninsula, she continued, because historically, despite the current division, the people from both sides have the same ethnic heritage.

Very little is known about the health situation in North Korea, which offers little, if any, official data to the outside world.

However, a 2014 study on North Korean defectors, released by the South’s Korea Centers for Disease Control and Prevention, showed that North Koreans generally were at much higher risk of disease.

In the survey, which questioned 1,588 defectors of all ages living in South Korea, 12.4 percent of males were suspected or confirmed to have Hepatitis B, while only 3.6 percent of their male counterparts in the South have contracted it.

Hepatitis B is an infectious disease that affects the liver and can cause vomiting, fatigue and abdominal pain. Around 15 to 25 percent of Hepatitis cases leads to death.

The survey further showed that 6.6 percent of male North Korean defectors and 3.4 percent of female defectors are believed to suffer from tuberculosis.

Only 0.409 percent of South Koreans are diagnosed with TB, according to the World Health Organization (WHO).

“Last year, the [South Korean] government came up with various ways to clear a passage for substantial cooperation between South and North Korea,” the president said, adding that Pyongyang has “yet to respond” to those suggestions.

“[South Korea has] suspended [many channels] of nongovernmental exchange due to repeated hostile remarks by Pyongyang,” she said.

Park added that the local government is “always open for talks and cooperation.”