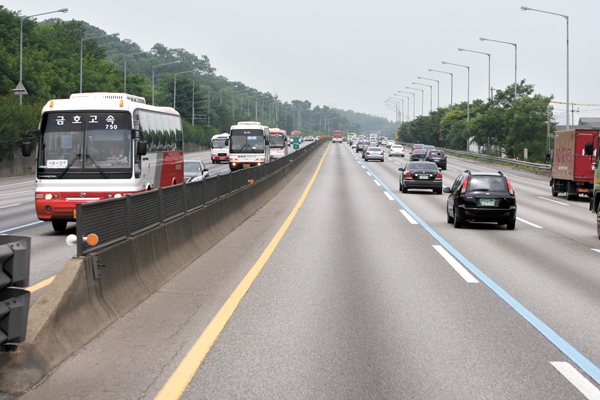 While driving toward Busan on the Gyeongbu Expressway, which connects Korea’s second-largest city with Seoul, Han Ba-da gradually decreased her speed when a message appeared on a device installed in her car.

“A vehicle one kilometer (o.6 mile) away is reducing its speed,” it read. “Be careful.”

In a matter of minutes, the 38-year-old watched as other cars on the road also reduced their speeds to avoid cargo that had been spilled on the road from a truck.

Then, two minutes later, Han received another message, alerting her to a traffic jam at Singal Junction (JC), where the expressway crosses the Yeongdong Express connecting Incheon and Gangneung, Gangwon.

Surveying the scene via the device, she was able to avoid the backup.

The portion of the expressway on which Han was driving is unique, not just for its historical significance - the roadway had a huge economic impact when the country was still rapidly modernizing - but because it is now at the center of another big development for the future.

An 11-kilometer swathe of the Gyeongbu Expressway, between Seoul Toll Gate and the Suwon Interchange, is currently the test site for the Smart-Highway project - the first of its kind in the world that was proposed by the government in 2006.

Since 2007, the Ministry of Land, Infrastructure and Transport and the Korea Expressway Corporation (KEC) have spent 88.8 billion won ($78 million) to develop 18 technologies related to communications and road management for the initiative.

Via a traffic-monitoring system known as Smart-I, drivers are alerted to crucial information - car accidents, traffic jams or construction - that is sent through a device set in real-time to their vehicles. The system is based on Wireless Access in Vehicular Environments (WAVE), a public communications network for traffic and roadway analysis.

“Once the system is introduced, vehicle-related incidents are expected to decrease by 60 percent,” said Jin Gyu-dong, who leads the Smart-Highway R&D Center at KEC, adding that Smart Highway technology is competitive enough in other markets.

Based on the results of the trial, the project will be expanded nationwide.

“Fifty years ago, Korea was a country that didn’t have a well-arranged network of roads,” KEC President Kim Hak-song said in a separate interview with the JoongAng Ilbo. “Now the country has a road operating with advanced technology.”

Various resources were required for the construction of the Gyeongbu Expressway, which was opened in 1970. Over 29 months, 8.93 million people, including 16 construction companies and three engineering corps, worked to build the roadway.

In total, 42.9 billion won was spent on the project at a time when the government’s annual budget was only about 160 billion won.

It was the second expressway built in Korea, constructed after the Gyeongin Expressway between Seoul and Incheon, and its construction is now considered to have had an immense influence on the country’s economic development.

Driving between Seoul and Busan, which once took about 15 hours, now takes just four.

The number of vehicles that traverse the country’s highways annually has also increased drastically since 1970, from three million to 1.4 billion in 2014. “The Gyeongbu Expressway has played a significant role in the country’s industrialization, contributing to its economic development and helping people to understand the scope of national projects,” Kim said.

A history of Korea’s highways