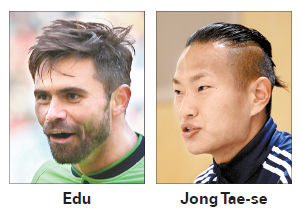 Concern is rising about whether the the K-League turning into an athletic version of Dongdaemum market; gifted footballers are leaving Korea for other locales.

Last week, K-League fans learned that two top players were leaving; one to play for the bottom-dwelling team in Japan’s pro league and another for a second division team in China.

On Wednesday, the Suwon Samsung Bluewings, now in second place in the league, announced that forward Jong Tae-se will move to Japan’s Shimizu S-Pulse, which is in last place in the J-League table. A day later, league-leading Jeonbuk Hyundai announced that its Brazilian striker Eduardo Goncalves de Oliveira, better known as Edu here, is moving to Hebei China Fortune Football Club.

The top two teams in the K-League Classic didn’t have what it takes to hold these players. For the 31-year-old Jong, who plays for North Korea in international competitions, Shimizu S-Pulse reportedly offered a 3.5-year deal at double his Suwon salary.

The case of Edu was even more shocking to fans. The 33-year-old Brazilian is currently the leading scorer in the K-League Classic, collecting 11 goals in 20 matches; he joined Jeonbuk only this season after leaving FC Tokyo in January.

The former Schalke 04 player was drawing a salary of more than 1.5 billion won ($1.3 million) with Jeonbuk, but Hebei reportedly offered to triple that and throw in a $3 million transfer fee, according to Chinese media reports.

While football clubs from Middle East have in the past been luring local players with big cash, Korea’s neighbors now seem to be joining the fray and Korean fans are watching their stars leave.

“Like the one with Edu, this kind of transfer can happen more in the future,” said Jeonbuk’s coach Choi Kang-hee last week, according to a report in Ilgan Sports, an affiliate of Korea JoongAng Daily. “We should be able to defend our star players [from moving] and spend enough money to keep players, but there is a limit to how much we can raise the quality of our football just by training.”

Sports figures are divided as to whether the K-League’s open salary system has caused the exodus. In 2013, the K-League made player salaries public to promote better team management, but some critics say the system has reduced spending by the big clubs and made it easier for foreign clubs to calculate just how much it would take to sign players in the K-League.

“When the league decided to reveal salaries of players, all the teams were concerned that the league was going to standardize downwards,” Choi said. “If you watch big clubs like Pohang and Suwon, you see they are reducing investments in their squads. If China keeps investing big like it is these days, what will happen in the next five or six years?“

But K-League officials said the open salary system was not to blame and that top players would have transferred overseas anyway if such sums of money are offered.

Some observers said local clubs should shift their thinking to see contract sales as a way to increase their income and find new talent by bolstering the youth football system here.