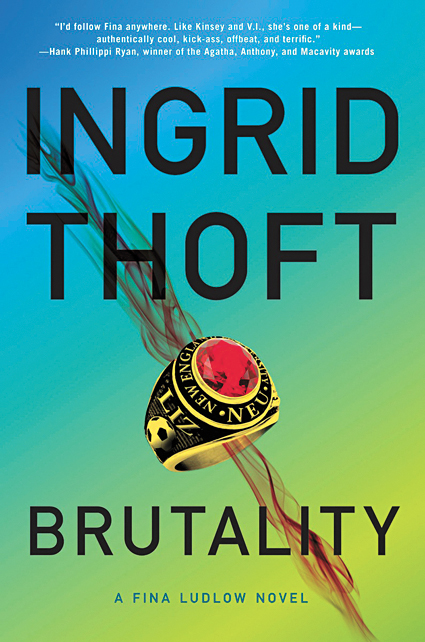 The challenge of belonging to a high-profile and dysfunctional family, yet establishing your own identity, continues to be the theme of Ingrid Thoft’s exciting series about Boston private investigator Fina Ludlow.

The only non-lawyer of the high-powered Ludlows, Fina works as the in-house investigator for her Type-A brothers and father, who run one of the leading personal injury law firms in the country.

To maintain her independence, Fina often takes cases separate from the firm, as she does in the compelling “Brutality.” Fina is hired by Bobbi Barone to find out who attacked her daughter, Liz Barone, in her Hyde Park home. The mother of two children and seemingly happily married, Liz appeared to have no enemies. The only anomaly is a lawsuit that Liz filed, blaming New England University for a cognitive impairment that resulted from injuries when she played soccer 20 years ago.

Fina also encounters Liz’s apathetic husband, Jamie Gottlieb, who seems uninterested in finding out who attacked his wife who is near death, the backbiting employees and supervisor of the research lab where she worked, and the university representatives who fear the lawsuit will decrease the funding it needs. Fina’s priority is the case, while her family pressures her to persuade Bobbi to steer the lawsuit to the Ludlow firm. Her father and brothers see the dollars - and the publicity - the case will bring them, while Fina sees only the relief this may bring to Liz’s family.

Thoft’s 2013 debut established her as an exciting voice in the private eye genre and she continues those high standards in “Brutality,” her third novel. The multilayered plot of “Brutality” excels with believable twists and realistic characters.

The complicated Ludlows possess a sense of entitlement and more than a few secrets, but they are also a close family. Permanently the outsider because she’s the only daughter and non-lawyer, Fina has learned to maneuver through the Ludlow morass and maintain her own sense of self.