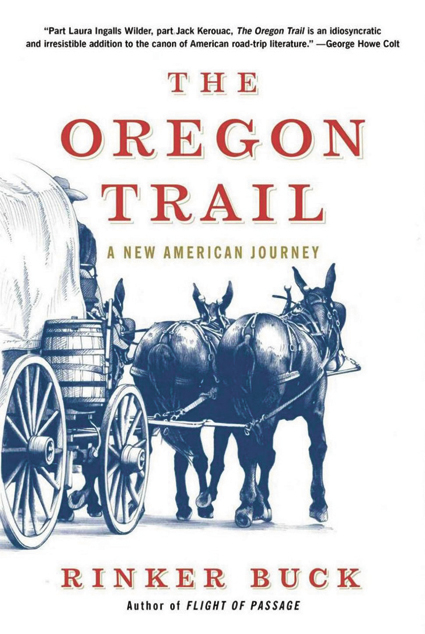 The “lunatic notion” to attempt a 21st-century journey in a mule-drawn covered wagon along the historic Oregon Trail may have been embedded in Rinker Buck’s DNA. After all, it was a longer, more arduous reprise of his “dream summer” of 1958 when at age seven he accompanied his father on a family bonding trip by covered wagon through New Jersey and Pennsylvania.

Buck’s latest trip occurred as he was navigating a rough patch in his life - a divorce, amidst heavy drinking - and like earlier pioneers looking for change, he decided to duplicate what 400,000 of them had done in the 15 years before the Civil War: head west as part of history’s greatest land migration.

Not since 1909 had anyone managed that feat, according to Buck, a self-described “history junkie” who hit on the idea of a nearly 2,000-mile-long journey from the Missouri River to eastern Oregon that would put him in touch with the nation’s past.

Accompanying him on the trip was one of his 10 siblings, Nick Buck, arguably the most entertaining sidekick since Don Quixote’s Sancho Panza. Profane and slovenly, the 250-pound unemployed construction worker with a Fu Manchu mustache had an unbeatable combination of mule-handling expertise, mechanical skills and the ability to bond with strangers, making it possible to fulfill their crazy dream.

Completing the cast of characters are Olive Oyl, Nick’s “incurably filthy” Jack Russell terrier, and the three Percheron mules that the author bought by phone in Missouri, a sight unseen. Jake and the two mollies, Bute and Beck, proved their mettle during the steepest mountain climbs and descents; the three were justly rewarded for their efforts with a comfortable retirement at a ranch in Idaho.

The four-month journey traversed the Great Plains along the North Platte River in Nebraska, climbed the Rockies and high desert of Wyoming, and descended gorges of the Snake River in Idaho. They were guided by trail markers, old wagon wheel ruts, historic accounts and helpful tips from people they met along their route.

Still, it was easy to get lost. The Oregon Trail was not a single route but rather a bunch of cutoffs and options that led Mormons to Utah, gold seekers to California and settlers to the Pacific Northwest. Interwoven in Buck’s adventure tale is a fascinating history of the development of the trail, its heyday and the colorful characters that made the journey.

The 19th-century pioneers faced a host of dangers, from flooded river crossings, hostile Indians, cholera outbreaks and the threat of falling from the wagon and being crushed under its wheels. The risks Buck encountered were no less real as he struggled to ascend a boulder-strewn ridge near the Continental Divide or keep the mules on course as a mile-long freight train approached on the tracks a mere three feet away.

Perhaps the most reassuring aspect of the journey was the hospitality that greeted the travelers all along the route. They were awed by gracious welcomes from farmers and ranchers who provided corrals, feed and water for the mules, meals and lodging for the drivers and valuable companionship and advice.

Whether their primary interest is American history, adventure travel or a captivating memoir, readers are sure to be delighted by this humorous and entertaining story.