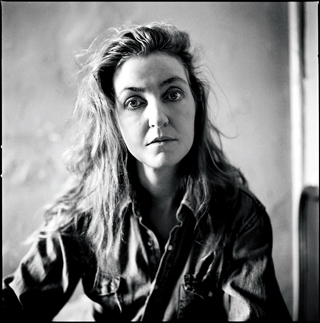 The recent arrival of the Korean translation of the last year’s book “Men Explain Things to Me” on shelves here was especially timely.

Rebecca Solnit’s collection of essays is about “mansplaining” - when men explain things to women in a condescending way - and how this act can lead to more serious social issues such as abuse or domestic violence.

In the past few weeks, revelations of relationship violence by the former girlfriends of online commentators Han Yun-hyung and Park Ga-bun have inspired a dialogue about abuse and women’s rights.

Solnit’s book, which was originally published last March in the United States, became a best-seller in Korea after it was released in May. It is rare for a book that covers feminist issues to make the best-seller’s list, but more than 7,000 copies have sold since the book’s release.

The author recently spoke by email with the JoongAng Ilbo, an affiliate of the Korea JoongAng Daily, sharing why more attention to feminist issues is needed.


Q. What kind of feedback have you received since the book was published?

A. Oh how I wish I was telling you good news about how liberated and equal and peaceful we are. I think the actual good news is that we are changing - in many, many places. I would like to hear more about Korea, but I know that India, Turkey, Argentina and many other countries are having the same conversation. The first step in curing a disease is diagnosing it, and that, I think, is what we are doing.

Why do you think that the issue of feminism has been getting more attention worldwide recently?

These things are cyclical. There were bursts of feminist energy in the early 1970s, early 1980s, early 1990s with Anita Hill [the attorney who accused U.S. Supreme Court nominee Clarence Thomas of sexual harassment] and now. I think that two things were going on. One is that feminists had, over several decades, gradually built a very strong foundation for the next phase. The ability to talk about consent and “manspreading” [spreading one’s legs wide while sitting on public transport] and street harassment and workplace power dynamics didn’t come out of nowhere. It was like seeds planted long before suddenly flowering. I think it was partly because, at least in the English-speaking world, many feminist-minded individuals had gradually advanced to positions of power.

You must have discussed this issue with men. What are their responses?

Lots of men explain to me that there is no such thing as mansplaining and that women and men are not treated differently. Other men take women’s word for it that these unfortunate things happen. The really important conversation that we aren’t yet having is about the ways men are damaged by the current system, by what masculinity requires of them and the ways it limits them, not in public power, but in private, deep ways. When men can see what they have to gain from changing all this - and some do, we are in a transformative period.

How can one start to talk to men who think they are suffering from reverse discrimination?

The men’s rights movement fellows are clear that their lives could be better. But they want to go backward, to a world where women are silenced and subservient. They don’t have a vision of how to go forward, and they regard women as enemies to conquer or punish. They think we are at war and want to defeat the enemy. There’s a better vision of the world in which the wars end and there are no enemies. I think that it’s mostly better to talk to people who are more open-minded.

Sometimes people use gender discrimination as a way to make a joke. And some women who show discomfort over such jokes are accused of lacking a sense of humor. Have you ever been in this situation?

Oh have I ever! I am so familiar with it. Humor is the velvet in which you sheath the dagger. Then you stab with your words and if the person being stabbed complains, they have no sense of humor. You insist that the cruel hostile insulting thing you’ve said is funny. But mean-spirited jokes about race, about bodies and disabilities, about sexuality, about so many things, are not really about humor. Humor is the legitimizing disguise for hostility.

But, you seem very optimistic about the future. What drives you to believe?

Well, look at the world 50 years ago: The United States had never had a woman on the Supreme Court; Britain and India and Chile had never had a woman prime minister; women were incredibly rare in politics and even public life; there were almost no women in positions of power at corporations and universities; and no one had even questioned, in a generation, the subordinate, sequestered role of women. If you compare where we are to perfection, you see our imperfections. But if you compare where we are to where we were - and to how bleak things have been for women in most societies not for decades, not for centuries, but for millenia, then you see that we are changing very fast.

You have mentioned in your book that Twitter is often used as a way to threaten female activists. Do you think that social networking services have too many ingrained to become a good platform for discussions on feminism?

Well, when you look at what Twitter is, you can look at who runs Twitter. A bunch of white men in an industry - Silicon Valley - that has had a lot of horrible violence and sexual-violence episodes recently, including a Twitter executive being charged with raping his ex-wife. The problem isn’t the technology. It’s who runs it. I think social media can be a very powerful place to discuss and organize. But I also think it is a place where people are strangers not only to each other, but to themselves - they so easily become cruel and invasive, and the nuances of facial expressions, tones of voice, pauses, body language are all gone. There is no substitute for two people or many together in the same space. We must not lose that, no matter what social media becomes.

What advice would you give on improving things?

I don’t know if I can give advice, because cultures are so different. I hope that spaces in which people can discuss their hopes and needs freely and see each other’s humanity exist and can be encouraged. I hope that men and women can see that the stories in which we are each other’ enemies make life grim and unpleasant. I do know a great many people who have wonderful relationships across gender lines - working relationships, friendships, family relationships, romantic relationships, marriages. Finding where the good is and building on it is often what works in my own experience. 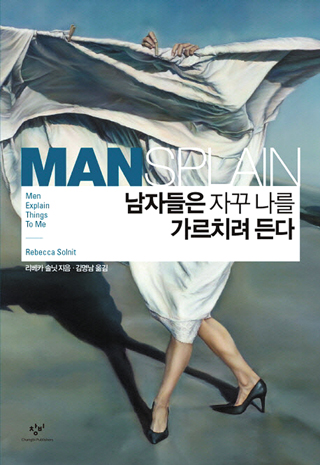 Rebecca Solnit’s “Men Explain Things to Me,” translated into Korean. The book, originally released in the U.S. last year, was published here in May. [JoongAng Ilbo]

What would you say to women who often start sentences by saying, “I’m not a feminist, but .?.?. ” because they fear being labeled that way?

Be brave. Have solidarity. And think hard.