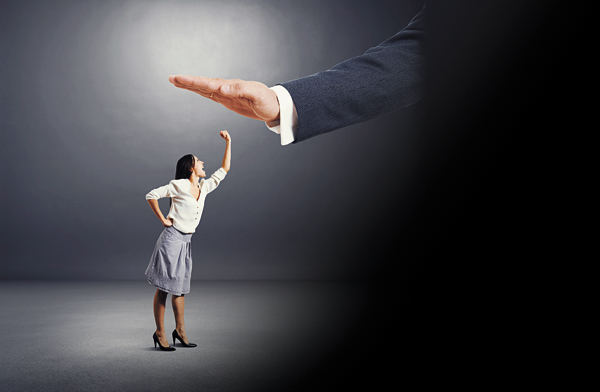 Kimchinyeo, which translates to kimchi woman, does not mean a woman who is good at making kimchi. Rather, many use that term for Korean women who excessively depend on men - mostly financially - or who think they can control men because they are women.

This is just one of many slang words devised in online communities to abase women who show particular physical or personality traits. Although these types of words have not instigated any collective displeasure or resistance from women in the past, people are starting to speak up against women being routinely belittled and stereotyped online.

“Misogyny has been widespread among netizens [in Korea],” Ha Jae-geun, a culture critic, wrote on his blog, “And I worry that such an idea will be the main characteristic of Internet culture here.”

There are a number of other online nicknames for women, with the most well-known being doenjang (fermented bean paste) woman, which means someone who spends too much on luxury brands or high-end coffee. Another is “Ms. Kim,” often used to refer to an unskilled driver, even when the gender of the driver is not confirmed. As Ha points out on his blog, the problem is that even when only some women possess these qualities, netizens use these labels to categorize all women.

“When a man makes a mistake, people just blame that person, but when a woman does the same, people [use a nickname] to ridicule the entire female population,” he wrote.

Another popular phrase recently is “Ah molang,” which means “I don’t know” in a cutesy way. It started when a woman posted on Facebook that she does not understand how the country works and worries about the future of Korea. An acquaintance asked the reason why, and she replied, “Ah molang,” adding that the country is just annoying without giving much explanation.

Now the expression is being widely used to indicate ignorant women who don’t want to discuss social issues or serious subjects.

An even more aggressive term is samilhan, which means that women should be hit once every three days. Men use this word online to belittle and silence women.

According to one observer, this hatred toward women is based on the difficult economic situation and a sense of reverse discrimination. This is evidenced by the fact that the misogyny in Korea seems to only target Korean women, not women in general.

“Since men think they have been denied opportunities [for jobs and good schools], their jealousy intensifies and becomes hatred,” said culture critic Hwang Jin-mi. So misogyny is “more common among people in their 20s and 30s currently struggling with practical issues.”

Netizens have been expressing these feelings online with very little opposition, but outrage at the hateful words has finally bubbled to the surface.

Earlier this year when an 18-year-old man surnamed Kim became the first confirmed case of a Korean joining the Islamic State, he wrote, “I hate feminists” on his Facebook page just before going missing in Turkey.

Soon after, a critic said in an interview that “ignorant feminism is more dangerous than the Islamic State.”

Then, during the recent outbreak of Middle East respiratory syndrome (MERS), it was widely rumored that two women, who were suspected of possibly having MERS, traveled to Hong Kong and went shopping while they were supposed to be quarantined. An online discussion board called “MERS Gallery” on the web forum DC Inside was flooded with posts condemning the controversial women, but the rumor turned out to be false.

According to one culture critic, that’s when the collective outrage against misogyny finally exploded. Female commenters fiercely turned the tables on men, changing the nicknames to male forms, like “kimchi man.” They derided men for spending too much money on sex, and even made fun of their body parts.

“What happened in MERS Gallery has made many realize that the terms many have used for a long time are part of hate speech against women,” said Hwang.

“It is not that doing the same - calling men disparaging nicknames and generalizing all men as ignorant - is right, but it was worth doing it as a type of shock therapy.”

Hwang said women have long complained to men about how their so-called jokes are hurtful for women, but men always denounced them by saying that “women don’t know how to take a joke” or “these stories are not about women but just fun obscene jokes.”

“When men became the target of such harsh words, many started to finally realize that these ‘jokes’ really hurt,” she said. “Women don’t need to continue to retaliate in the same way men have, and it’s time for them to move forward and have other more substantial talks on respecting each other.”