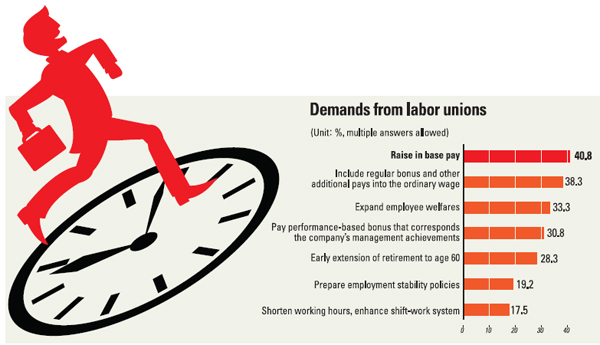 The two hottest topics in this year’s wage negotiation season for the major conglomerates are a raise in workers’ base pay and how to calculate that base.

Unsurprisingly, labor unions at the conglomerates are focusing mainly on the size of the raises they want. But this year, they are also pushing hard to redefine what is included in the base pay, which determines the rate at which they are paid for overtime. It also sets recomputed wages based on the new court-imposed standard.

The Federation of Korean Industries (FKI), an association of the nation’s large business groups, released on Sunday a survey of 200 of Korea’s 500 biggest firms; 136 of the companies are unionized and 64 not.

Fifty-eight percent of the companies said they adjusted their ordinary wage levels last year to comply with a Supreme Court ruling in December 2013.

The court ordered that all fixed pay amounts given regularly to workers be included in the wage base, regardless of what the pay was called or how often it was given.

Of the 116 companies that said they had already complied with the ruling, nearly 40 percent said they had followed the court’s decision to the letter. The others said they had included only selected compensation in the ordinary wage level or had set up entirely new pay rules in the company.

After the adjustments, 61 percent of the companies said their wage levels had risen, 38 percent reported no change and 1 percent said the ordinary wage had actually shrunk.

But 42 percent of the companies surveyed said they haven’t been able to reach an agreement with their labor unions.

Thirty-one of those 84 companies said they are involved with lawsuits involving current employees and retirees. After the court’s decision and because of labor law provisions, the new base wage must be applied retroactively to the past three years.

But one element of this year’s labor talks is less controversial. Most surveyed companies said they expected agreement by employees with the peak wage system, which will reduce wages for employees near retirement age in return for job stability until age 60.

Nearly 74 percent said they planned to implement the peak wage system by end of this year. But acceptance was not universal; about 14 percent of the respondents said their unions are strongly against the initiative, which is being pushed by the government.

Lee Cheol-haeng, head of the FKI’s employment, labor and management department, said his federation hopes to see salary negotiations end smoothly because of the sluggish domestic and world economy. He said, “It is time to refrain from wage raises and work to boost corporate competitiveness.”